Earlier this year I was asked by my son, Gary (who works for Free Style Games/Activision) if I could produce a desk-top statue of one of the characters from the new computer game DJ Hero. I agreed and the image below is a photo of the model I produced of the in-game character Cletus Cutts.
Photo One - A close-up of the finished statue - which stands over 10 inches tall. 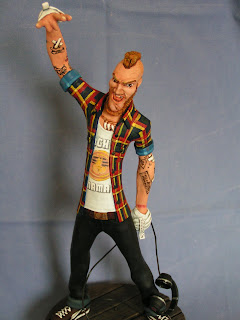 Photo Two - I was lucky enough to be shown some pre-game images and this photo shows the finished DJ character as a mesh. I was very pleased with the outcome and feel that I have captured the computer character in the physical sculpt. 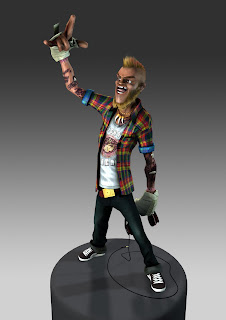 Photo Three and Four - Show the finished model on a wooden display plinth. 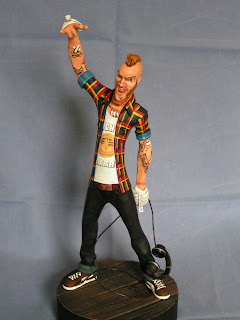 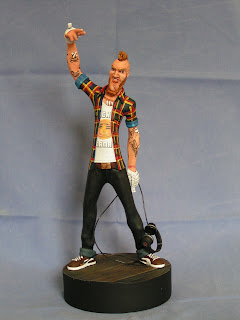 Photo Five and Six - Show close-ups of the finished model. 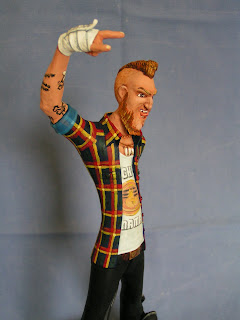 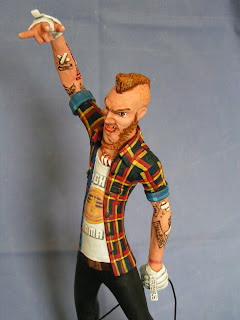 The statue is based on a 10 inch Guitar Hero figurine, which was stripped back to the bare mannequin, then re-animated into the pose seen above, re-built and clothed with a variety of different epoxy fillers and finally painted with acrylic paints.
The statue is now on display at the head offices of Free Style Games in Leomington Spa.
The whole project took some two months, to complete, with the main time being spent in sculpting and painting. It was a new challenge for me to produce such a large model and a subject matter that is quite different from my usual modelling projects. I have been allowed to use these images on my Blog with permission of Free Style Games - thank you.
Tony
Posted by Tony at 09:37