I recently picked up some Eureka 40mm Musketeers from E-Bay. The sculpting on these figures is quite exceptional and I look forward to painting them. However there is an obvious flaw with the scale thickness of the rapiers, as you can see on the figure on the right!
I wanted to replace the too-thin sword blades with something a little more serviceable and this post shows how I went about it.
Photo One - Shows the modified 40mm Musketeer (on the left) with one of the original models (on the right). I have replaced the sword and scabbard with 32mm carpet tacks. 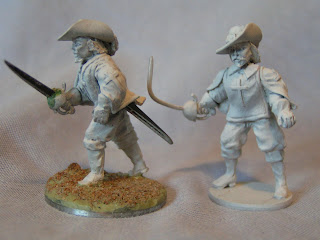 Photo Two - The finished conversion with a 30mm metal washer base and the sword replaced. 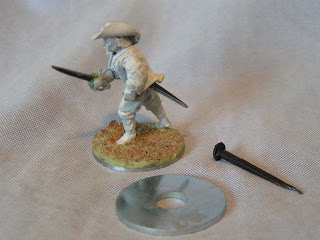 Photo Three - The Wilko brand washers and carpet tacks, aprox. £1.00 per pack. (Wilkinson's is a group of UK household stores - a bit like Woolworths). 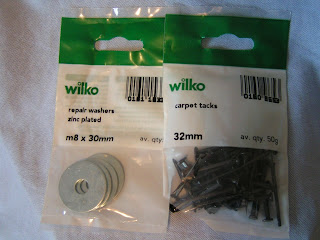 Photo Four and Five - Show the miniature in greater detail. 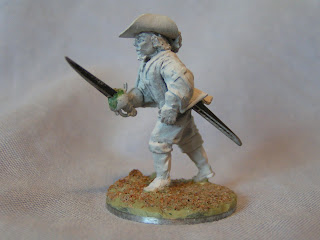 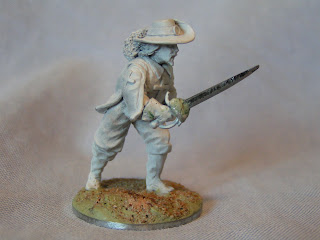 The base is built-up with Milliput and then sprinkled with fine sand, while the carpet tack was first cut to size and filed to define the shape. The handle or grip of the sword was filed into a prong and inserted into a 3mm hole which was drilled out with my Dremel. The too-large hole was filled with superglue and 'green stuff' - giving a very firm bond. The scabbard was done in the same way.
I realise that the new blade is a little over scale, but as I intend using the models for gaming, I believe that the compromise is acceptable. For anyone wishing to copy this technique - be aware that the point at the end of the sword is very, very sharp!
I prefer using a 30mm metal washer than the smaller round bases (which come with the figure and feature a larger, second base for keeping a record of wounds). Further posts will detail the painting.
Tony
Posted by Tony at 10:40

Lovely models by the look of them. I look forward to seeing them painted.
Not quite my thing, but nice to see Wilko's stuff coming in useful!

Nice idea with the carpet tacks.