Last month I was clearing out some old photos and rearranging folders when I came across a whole load of images of this group of Flintloque Undead. In particular the 3rd Pavlova Grenadiers (code 55518). The painted miniatures are over a year old and have previously been featured on this Blog and Flintloque Yahoo Group sites, but I still wanted to include them, as they are one of my favourite regiments and group of Flintloque figures.
Photo One - The Liche, Count Pavlov, which was a runner-up in an Alternative Armies single figure painting competition. 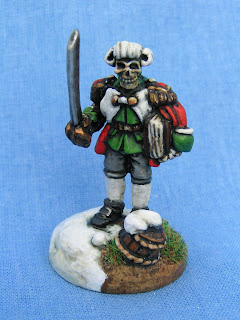 Photo Two - A group of eight Pavlova Grenadiers (the actual set 55518 contains six miniatures) , this group has two added and converted figures, an extra Grenadier with the head from a Heroclix Solomon Grundy figure (second from the right) and a converted Bog Orc command bugler from the Connartist Rambler Command (54034) blister pack (third from the right). 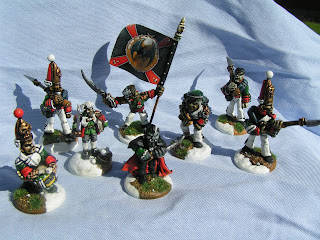 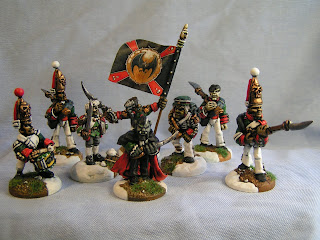 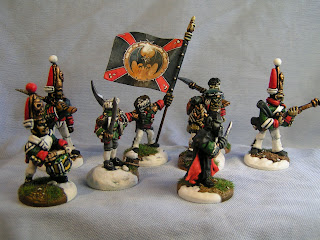 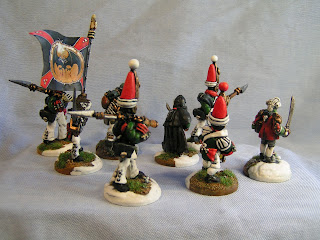 Photo Six - The group of six Undead and the contents of the 55518 set. This group was a winning entry in another Alternative Armies painting competition.
The gateway in the background is scratch built from MDF and two Gothic pens that were bought from Euro Disney. The barrel is a resin casting, the gates made from plastic card and the Ferach flag is sculpted from Milliput. It was modelled to be an entrance to a grave yard. 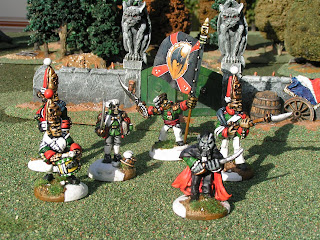 Most of the figures show some conversion or modification, extra trouser detail or added buttons etc. The standard was downloaded as a black and white line drawing from the Internet, then painted with acrylics and highlighted with the same techniques as I paint my figures. Each of the miniatures are mounted on to UK 2p coins, with the bases being built up with Milliput epoxy resin.
I feel that these miniatures show off my particular painting style to its best, a black undercoat and bright primary colours with some even brighter highlighting! 'Almost cartoony'. You will also notice how I have tried to vary the skin tones and colour, in fact the skin effects were copied from the Zombies in the Michael Jackson video Thriller! A great source of inspiration when painting the Undead.
Most of my Flintloque collection are locked away in storage cases, this small group is displayed in a glass fronted cabinet in the hall - very special treatment!
I hope you enjoy seeing them (again).
Tony
Posted by Tony at 07:50

those are wonderful models. I really want to get a set myself!
They do show off your painting style and I would love to see more of your flintloque collection. I really enjoy seeing your models painted up.
I really ought to start posting on my blog again...

Oh and put me down for one of those Flintloque buildings. I imagine I will want one.

Great work, as usual. I invested in Flintloque early on, but never went anywhere. I love the idea of black powder fantasy, but can't get past the figures. Their giant fingers can't even fit in the trigger guard.
-J

Tony these are very special indeed. I really enjoyed this review of your models and believe that your painting style is very creative and commendable. I particularly enjoy the lich and the undead unit although the converted orc also has a lot of character. Kudos!

BaronVonJ, I love the figures, they are in their own league.
There are quite a few duff ones, and I used to be first to point that out. Then I tried sculpting them myself and now I am sculpting for AA.
I have quite a few problems with the anatomy of some of the early figures (such as the positioning of ears on the first dark elf line), but other than that... Mike Owen's old sculpts always excelled in my opinion. I think they are fun and characterful.

I'd like to see some sculpts by you someday, see what you make of it. :)

However, I shan't shoot you for having an opinion! I am not a fascist!

In fact, I love your old sketches of Wild West fantasy, perhaps mail that to AA. Maybe the miniatures design team could make something of them...

Now, now - no fisty-cuffs on this Blog:)

I happen to like the 'cartoony' style of the Flintloque miniatures and actually enjoy painting them in a similarly cartoon style.

As far as the hand and finger are concerned, I would agree that the fingers and hands of the early figures in particular are a bit 'beefy' but rather than criticizing the sculpting, I prefer to accept this as a particular miniature style!

I have also passed (negative) comments on some of the Flintloque sculpts - there are always some howlers in any range. Rather than continue with such comments I have sculpted some miniatures for AA, they are still to be cast up. But I would hope to see them on the AA site very soon.

Finally - I would recommend picking up a couple of Flintloque figures and trying again. Look at them as fun figures rather than trying to paint them as Front Rank or Foundry statues!

I have quite few Flintloque and painted a few. That's why I don't really care for them. Just my opinion. I think your painting has been great on them.
My next journey is trying sculpting. I tried "greenstuff" and didn't have much luck, so I'm trying the "grey stuff" and see how that goes. Yes, I'm trying the "Olde West" and maybe a few ideas I had for a Great Northern War between the Dwarves and the Orcs.

I've tried Grey Stuff and found it too solid to work - not easy. My preferred medium is Green Stuff for fine detail and Milliput (green/grey) mixed with some Green Stuff for larger detailing - about 1 part GS to 5 parts Milliput. All very well mixed and heated on top of a light for a minute or two before sculpting.

You may want to try this mix.

One other point is that for detail I will usually use Superglue to hold the GS on the sculpt.

Apologies for the fisticuffs!
Defense mechanism you see!

That's great to hear you have sent some sculpts in Tony. I look forward to seeing them.

Only problem with milliput is that it doesn't hold up well in the moulding process. That's why the Von Jung cavalry aren't on general sale anymore. The pigs were milliput based sculpts and the moulds wore out really fast.
I don't know how well GS and Milliput would do, but perhaps I will try it.

Grey stuff, yeah, it's a little too hard for me. I think it's all about starting with just conversions and then building over armatures. eBob's armatures are really good, bit pricey, but good.

I use Green Stuff for the bulk of my sculpts and Brown Stuff for particular fine details.

BaronvonJ, should you ever wish to be rid of those Flintloque miniatures, I'm sure Tony and I could find a good home for them ;).