For no apparent reason I wanted to include Martian Aerofauna in my Space 1889/Aeronef collection. I already have some Canal Drakes and 'floaters', see earlier Space 1889/Aeronef posts. My criteria is simple the models have to be compatible in size with my 1/300th scale Aeronefs and be modelled in a flying stance or in the action of flying. This Thaniras Dragon from Spartan Games fits the profile perfectly. The bonus is that it is a fantastic sculpt.
I purchased my example for £6.30 (inc. P&P) via e-bay from Maelstrom Games, a company that I have no hesitations in recommending, the packaging was very good and delivery was within 48 hours.
Photo One - Shows the finished Draco Rex. I choose a dark brown, aged leather colour scheme and 'animated' the model, twisting the tail and bending the wings prior to painting. 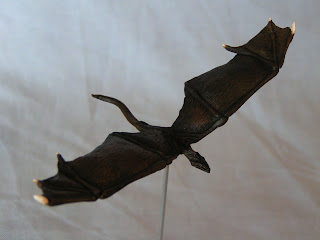 Photo Two - An official image of the Dragon taken from the Spartan Games Web page, (used without permission), as you can see Spartan Games have chosen a very striking dark blue/black colour scheme. 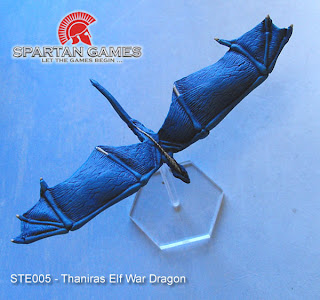 Photo Three - Because of the weight of the model I decided that I needed to modify my usual basing technique and as well as using a cut-up metal base, I filled the 40mm GW base with resin, car repair resin from Halfords. 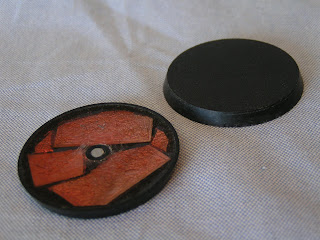 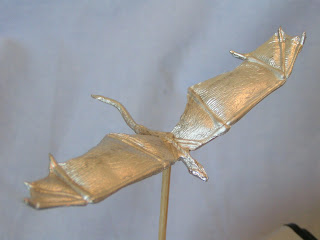 Photo Five - My finished and based Draco Rex. The model has a wingspan of 110mm and is mounted on to a metal rod 100mm tall (slightly taller than my normal basing, but I wanted this to be an imposing model). I chose Draco Rex, The Dragon King as a name that would be immediately recognisable and instill fear into the crews of Martian and European Cloudships alike. So far I have no idea what Aeronef stats I will use for the creature, or how I will use it, - but it looks great. 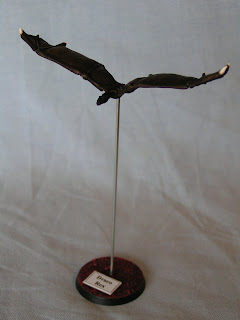 Photo Six - Draco Rex alongside the Privateer Sailship Justus to give an idea of the size of this miniature when placed next to a 1/300th scale Airship/Aeronef. 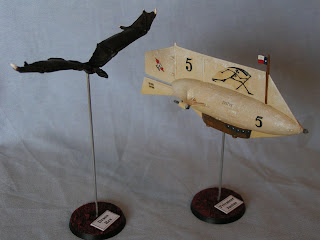 This miniature was very easy to paint, a black undercoat, dark brown and Snakebite Leather upper surfaces with just a touch of red. The details were picked out with black, ivory and white and some red detailing to the crest along its back. I used black, sepia and red washes from Games Workshop prior to varnishing.
Tony
Posted by Tony at 01:35

Very nice indeed! i loved the pirate vessel as well!

What a great idea!
J