Barking Irons #2 - the in house Fanzine/Magazine from Alternative Armies is now available to buy, see;
http://www.alternative-armies.com/Barking_Irons_Magazine.htm
Once again I have a modelling article included, Is that you Mr. Obidiah? A short article and photo feature including a number of images of my Limited Edition Obidiah and some of my conversions. This Games Workshop Empire Ogre Standard Bearer has been dressed with Green Stuff and armed with a Flintloque armourers pack gun. The bicorne was taken from a separate figure and once again built up with Green Stuff. Prior to me owning a LE Obidiah or one of the Obidiah miniatures from the Boxed Set, this was my Obidiah stand-in. 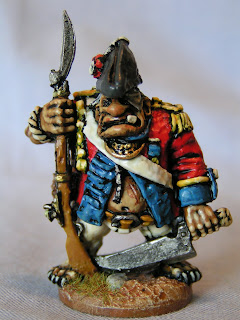 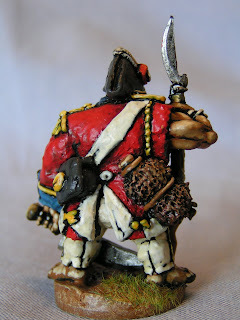 It's been some time since this model has seen the light of day - being relegated to the bottom of a figure case, but with the article in Barking Irons, I felt it was worth including him here.
The miniature is 45mm tall (head to toe) and is mounted on to a UK 2p coin. Similar GW Ogres appear on e-bay quite regularly.
Further details are also featured on TMP, see;
http://theminiaturespage.com/news/649837/
Tony
Posted by Tony at 01:49