Craig Andrews of Barking Irons Online has just updated the site with the latest Foul Mouth Freddy short story and scenario called, Monkey Business which was written by me.  The story and scenario was originally intended to be featured on BIO on St. Davids Day, but regular readers will know that Craig is a little busy planning his wedding to Emma. On the eve of the wedding Craig has posted this story and scenario to BIO. Now that's dedication! 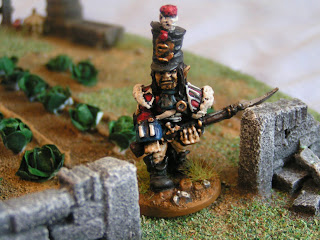 The image above shows Freddy sneaking into the Catalucian port town of Atria while trying to avoid the unwanted attentions of either Ferach Marines, Catalucian Guerrillas or some unfriendly Drug Barons. In the background a small force of Orc Redcoats from the Albion port of Hartlesspool and led by that inept character Josiah Wedgit have just begun an assault against some very angry Ferach Marines.

For full details go to this this link.

Foul Mouth Freddy stories and scenarios have been featured on this Blog many times. The inspiration for the character was my Uncle Fred. I sometimes wonder what he would make of his Orc Sargent alter-ego?

I hope you enjoy this latest adventure.