There are times when searching for a suitable 'hook' to build a gaming scenario or background story upon is a hard and thankless business, while on others it just falls into place.  On a recent visit to W H Smiths (a newsagent and book store chain in the UK) I came across this Commando War Comic - The Regimental Spoon (issue 4579 from February 2013) which just cried out to be re-worked into a Foul Mouth Freddy or Flintloque themed story and scenario.  For full details of the issue go to this link where it is possible to preview the story, just 'click' on the preview issue button.

"A soldiers lucky charm! A Regimental Spoon, someone has the same warped imagination as me!" 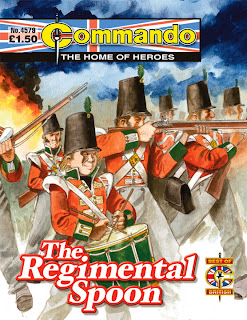 Commando War comics have many story threads that just 'cry out' to be re-worked as gaming scenarios and in a game system like Flintloque or Slaughterloo the more outlandish the better.  In fact the next time you are struggling for a new gaming scenario, what ever the genre try searching Commando War Comics on Google or e-bay. Operation Hammer, Bailey's Raiders, The Fighting Cowboys, The Lucky Helmet are just a few of the titles that just cry out to be converted to gaming scenarios. There are also such titles as Save the Eagle - a Romano-British based story or Nazi's in Space to get the creative juices flowing or even Gladiator Challenge for the more Sci-Fi orientated.

Remember that Starblazer - the pulp Sci-Fi alternative is also full of great inspiration. So the next time you are looking for a not-so-original gaming scenario, Commando Comics maybe your best friend and offer that illusive thing called fun. In addition they are usually great, reads.

Update
The Regimental Spoon is not a Napoleonic story. It is a story that has its origins in the Peninsular War, but the story develops from modern Afghanistan, back in time to the Napoleonic War, and then via the India Mutiny, the Zulu Wars, WW1 and WW2. It is actually a story of a family of British soldiers through the ages rather than just about the Napoleonic War.

There are however dedicated Commando Comics that are just based during the Napoleonic War as there are others for the Vikings, Romano Brits and even the American Civil War not to mention Vietnam, Korea and The Gulf Wars.

If I ever win the lottery I would love to see a Foul Mouth Freddy story drawn as a Commando Comic strip.

Commando does Napoleonic wars? That's amazing. My collection from the 80's was only WWII. Now i want to read that! Shame there,s no source for Commando comics in French Canada. :(

Amazing. I have never seen a Commando comic that is not WW2. But yes, I agree that the plotting is simple and condensed and as such it is already framed for Flintloque scenarios and such.