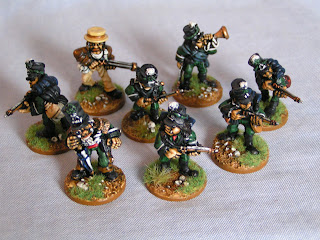 My complete Flintloque Section - 'The Fighting Forty-Firsts' based on a Commando Comic called Days of Daring (number 3765), for full details go to this link. While this Blog. contains more details of how the initial miniatures were re-based and painted, search the Flintloque Label on the right of the page for more information or go to this link.

I am attempting to raise a small Flintloque section using Flintloque Third Edition rules and following the same formula as this post by Gavin Syme and featured on Barking Irons Online.

The Northshires or Forty-First Foote Regiment are light troops serving under 'Olde Nosey' in Calalucia and employed to harass the Ferach and defend their allies, the Algarvey Goblins and the Catalucian Dark Elves. This is the regiments first taste of action, although a few career soldiers have already tasted blood.

Photo Two - Show Luke Benson - Platoon Commander (second from the left) and his section of light troops. Detailed from left to right they are;

2. Lieutenant Luke Benson (our hero) Platoon Commander / experienced / light troop
Sharpeshooter, Raised from the Ranks, Good rider and Does not like dogs (frightened by one as a young boy).
Bakur Rifle and Bayonet 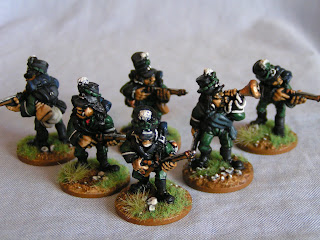 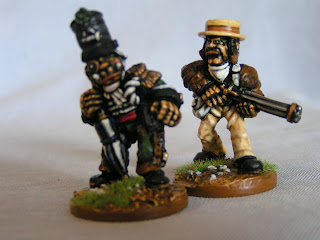 The 'Fighting Forty-Firsts' have built a very good reputation against the Ferach invader in Catalucia, Luke is seen as one of the very brightest new officers, but his cousin Robert is a scoundrel and although he would never do anything to endanger the squad he should be played with extreme caution.

I have yet to play a game with this section, but have enjoyed putting it together and developing the stats and background story based on the Commando Comic. I hope you enjoy reading about them.

An excellent fighting force Tony. My own Korsucan's have seen little action of late but that will change when more spare time comes around.