The Panzerfauste Kickstarter has now reached £20,000 plus, easily outstripping the £5,000 goal and it still has 12 days to go!

For details of the Panzerfauste Kickstarter from Hysterical games, please go to this post.

I have already commented on the fact that I have pledged towards this game and been involved in building themed terrain for the game. I can now report that the first of my scratch built building is planned for production in resin when the Kickstarter pledge reaches £25,000.

The Gnome bakery has already featured on this site, for details see this post the first test model was painted up by Steve Blease, of Bleaseworld. I have included this work-in-progress shot below. The Bakery was designed on a scrap piece of paper when Rob Alderman and I met up at the Costa Coffee shop in Leomington Spa to first discuss this project. The drawing featured in the 'Great British Bake Off' logo at the top of the page is the actual rough sketch! 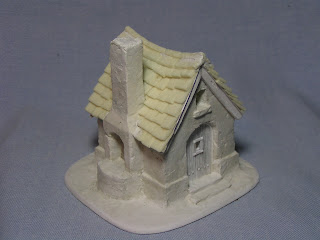 I can also confirm that some additional 'test' models have been painted by Ant Evans of The Anarchy of Anton. details can be found here.

The small Bakery was designed to show how important food is to these Panzerfause Gnomes and although intended for Panzerfauste - I believe that it could be used with many Fantasy based games.

I look forward to seeing it in full production. Be aware that there are many more Panzerfauste themed terrain pieces already produced and waiting patiently in the wings for authorization and clearance for me to post details.