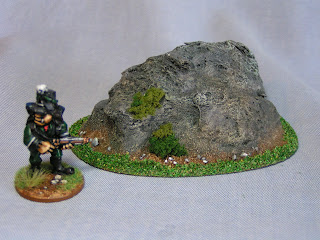 My obsession with Frostgrave and in particular building scratch-built terrain for the game continues.....

Image Two - Using cheap insulating foam and some scrap 3mm thick plastic card, I have the basis of a simple rock.

The foam was found on the roadside while I was returning from a day trip to Pershore. With Sue, my Mother and my Mother-in-Law in the car, I saw a huge slab of silver-foil clad insulation foam at the side of the road. Luckily, I have a large wheel chair accessible car (and a very understanding Wife), so I stopped and threw the foam into the back of the car.

When I returned home I cut the slab into smaller sections for use as modelling material. The foam is nothing like Blue Foam or Styrofoam, being much softer and easily broken up, however for rocks - it works fine.

I snapped and picked at the foam to achieve this natural rock look. 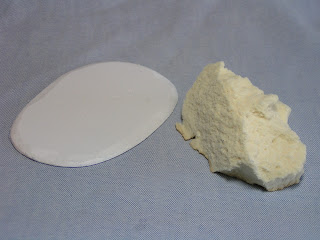 Image Three - One of the issues with using this type of foam - is that it is very (very) light and kept being blown across my workbench when ever I tried to speed up the drying times with the hairdryer.

I got around this by cutting a hole in the bottom of the foam rock and inserting a small stone (found in the garden) in to the bottom. 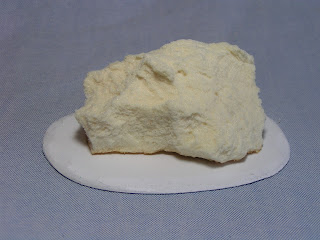 Image Four - The rock was sculpted into the base with DAS modelling clay. In this image I have primed the whole model with three layers of uPVA glue. Something you have to do with this 'soft' foam. 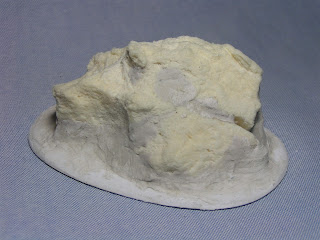 Image Five - The basecoat is a layer of black, white, brown and blue, slapped on with a large soft brush, mixing the colours on the rock rather than the palette. 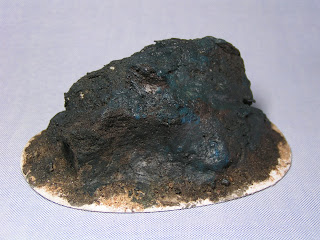 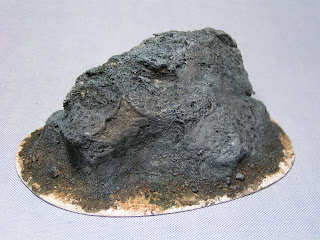 Image Seven - The painting continued with more drybrushing and the painting of the groundwork. I have used my usual groundwork colours of Snakebite and white. You should also be able to see how I have blend the Snakebite into the grey of the rock, hiding the demarcation between rock and groundwork. 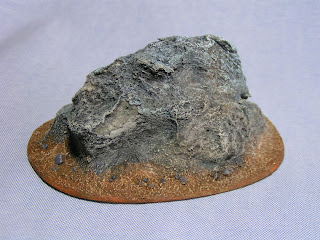 Image Eight - The rock was varnished with galleria Matt Varnish before the Railway Scatter, static grass and ground foam was added. 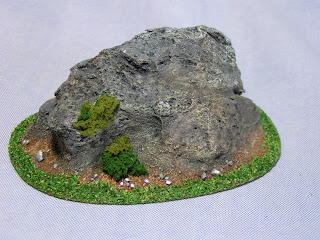 I have to admit that this style of foam is not perfect for building Wargame Terrain as it is easily damaged, however (as can be seen in the image above) the damage is hard to see as it looks so natural.

I have used this foam in the past but just found it too fragile for the table - mind you I only just painted mine...

are you going for the warm Frostgrave or will snow/ice be added at a later point?

"Are you going for the warm Frostgrave or will snow/ice be added at a later point?"

My plan is to add the snow as a temporary add-on and later.

I have read about sprinkling on baking soda/bicarbonate of soda. This means that after the game you can use the terrain piece for 'other' games.

It is such a relief to discover that others literally peruse the world around them looking for modelling materials!

Well done with the rock it looks amazing...and next time I pass a skip I wont feel self conscious peering into it for treasure!

Never and I do mean NEVER pass a skip without looking in.....

Great stuff Tony, lots of inspiration. I'm embarrassed to say that I still haven't made any terrain from your wonderful books. I think it's a little gamer ADD with a fickle obsession over figures from vastly different scales and periods.