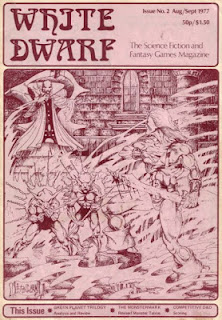 This is a bit of a special post for me, actually a very special post. Earlier today Sue and I had a day out in Cirencester, Gloucestershire and as we promenaded around the town centre. I popped into the Oxfam Book Shop and picked up a copy of White Dwarf - issue 311, an issue that I had not read. As I approached the counter I was asked if I collected White Dwarf. I replied that I was not such a big fan of the later issues but had quite a collection of the earlier issues stored in the attic.

Lawrence - the shop assistant said that upstairs he had White Dwarf issue No.2 and some other early issues, he asked if I was interested in seeing it?

Is the Pope a Catholic?

After some time he brought down a beautiful, pristine copy sealed in a plastic protector wallet and said that this copy was available for £25.00.

I have to say that I was tempted and agreed that it was probably worth a lot more - closer to £40.00 - but I just couldn't bring myself to spend that much money on an early WD. We chatted for some time and I thanked him for allowing me to at least say that I had once handled a copy of White Dwarf issue 2!

It didn't take long for the doubt to set in - actually about twenty steps.

Sue said that she would buy it for me as a Christmas present, but I (after some self doubt) relented and with debit card in hand I succumbed to the temptation and bought it.

As I sit here writing this post the still wrapped issue of White Dwarf no. 2 - is still wrapped! I am really nervous about what I will find when I open the plastic wallet, will I be disappointed? How can it live up to my expectations?

I'll report back later if I have been brave enough to open the plastic wallet and what I found inside.

For anyone interested and you'll have to be fast as I would not expect these magazines to be around for long, Oxfam Cirencester has some more early White Dwarf magazines for sale.

Details of the store are;

Is there a lot of interest in the early WDs then? I think I have a set running from #1 - #24. I'll have to go look. None are in plastic and all have been read, probably many times.

I would suggest that there is.

A browse on e-bay usually shows that early editions don't hang around for long.