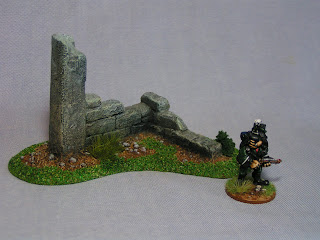 I have continued to add to my collection of scratch-built wargame terrain for the new game Frostgrave. This time a short section of ruined wall. 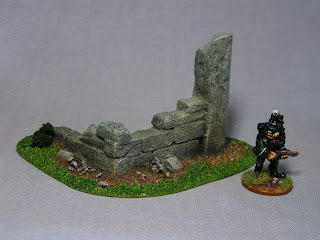 Images Three and Four - The construction was simple. A couple of pieces of spare or waste Blue Foam, on a 3mm thick base of plastic card.

The groundwork was built up from DAS modelling clay with further texture added from sieved stones and sand. I have purposely added larger stones to the groundwork to make it look more ruined.

In this image I have added some DAS to the wall and given the foam a couple of coats of uPVA glue. Even so, the model was completed in a couple of hours. 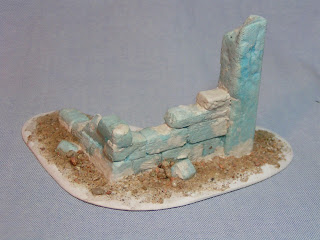 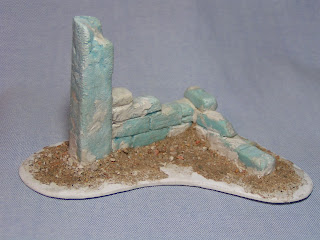 Image Five - The basecoat was a dark grey/dark blue mix. 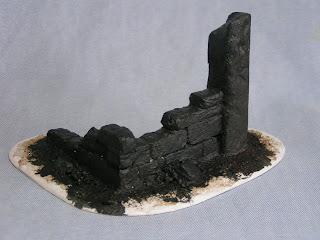 Image Six - The first highlight colours were drybrushed on with a stiff hogshair brush. I was trying for a rough stone effect. 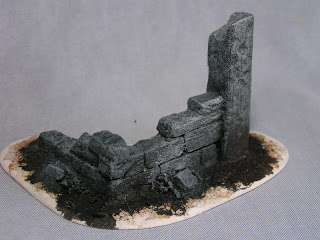 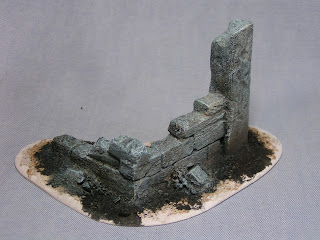 Image Eight - I have painted the base in my usual Snakebite Leather mix and washed both the base and walls with various bought and home-made washes. 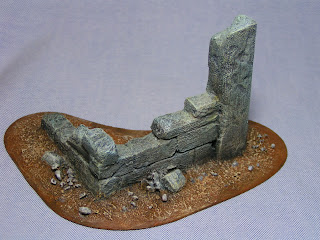 Images Nine and Ten - Prior to adding the flock or railway scatter, I have varnished the model with Galleria matt varnish. 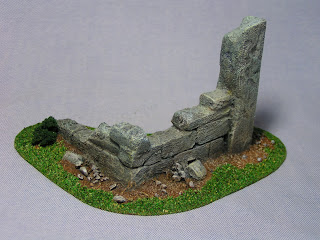 I have NOT added any snow to my terrain pieces, as my plan will be to sprinkle snow effect over the gaming board and scenery rather than add it permanently.  This means that these pieces of terrain can be used with my Flintloque terrain collection. 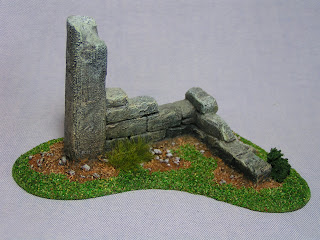 This small piece of 'clutter' is 140mm wide x 80mm deep and 75mm tall. It was made from scrap material that I had in the shed - construction and painting took about 4 hours work over two days.

Look out for more items of terrain for my planned game of Frostgrave over the coming month. I will try to post one item a week. Maybe more.

very nice and I'm impressed with the speed of production.

"I'm impressed with the speed of production."

I find that a couple of hours down the shed listening to 5Live on the radio is enough to build simple models like this.