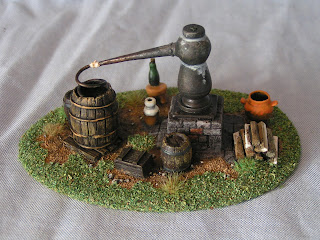 In part one and part two I showed the inspiration and construction of this piece of Flintloque themed terrain. With construction finished it was on to the painting. For details of part one - go to this link and for part two - this link. 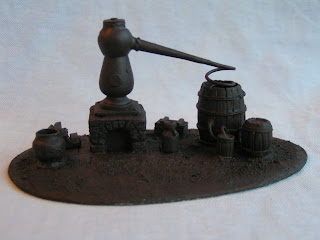 The model was undercoated with a Dark Chocolate Brown, a mix of Charred Brown and Black. I am finding that a dark brown undercoat is less harsh than a pure Black base for painting. This tip was passed on to me by Kate Bodley (of Grand Manner - one of the best terrain painters I know). 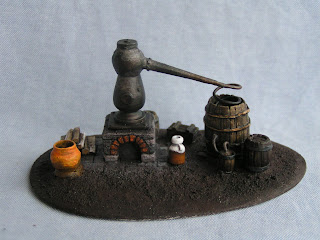 In this image (and the two below) you can see how the colours were built up over a basic dry-brush. 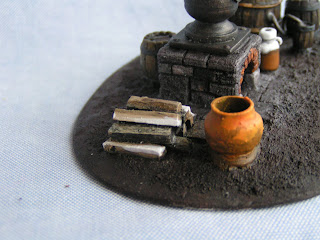 The colours were then developed - the jug, earthenware pot and wood kindle are examples of how this was done. 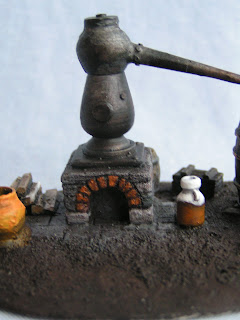 The Pot Stills I have seen on GOOGLE images tend to be dark grey with just a hint of underlying Copper. The Still was painted with Dwarf Bronze mixed with Charred Brown and then over painted with Dark Grey (almost Black) before being 'washed' with Badab Black to give a well-used and neglected look. 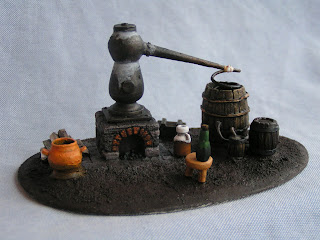 As the painting progressed I was conscious of a number areas where I wanted more detail. In these three images you can see the additions I have made. Firstly I have added some bandages between the Swans Neck and the cooling pipe - this was modeled with some modelling paste and when dry painted with Snakebite Leather/White. The Fireplace now has some fine cinders added - just some sand painted over uPVA glue and the larger Earthenware Pot (used to fill the Still) now has two plastic card handles. 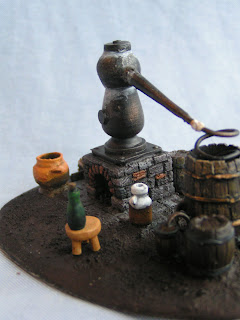 The three-legged wooden stool for the Bog Orcs to sit on when waiting for the Still to work was build from a small disc of 3mm plastic card with bamboo skewer legs. The bottle was carved and sanded from some spare resin, the stopper being a sliver of plastic rod. 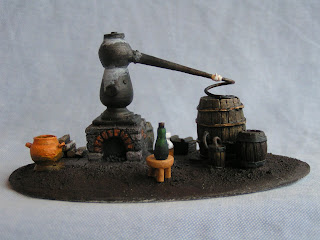 I noticed in some images that Cognac Stills have a 'White Bloom', something that I wanted to include. The 'Bloom' is in fact grey and tends to accumulate in joints and hollows. I painted watered-down Grey and then watered-down White in streaks around the main joins on the Still and then 'washed' the areas with watered-down Badab Black. 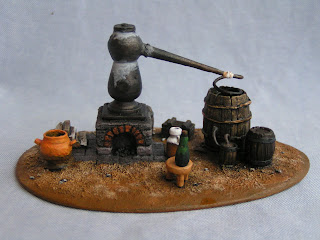 The base or groundwork was built up over Snakebite Leather with varying amounts of Skull White added for dry-brushing. The small stones were picked out with Black/White and again 'washed'. 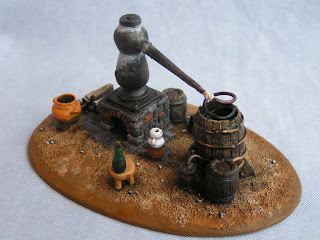 I have kept the main Furnace or fireplace dark, as in the images I searched out there was no chimney! 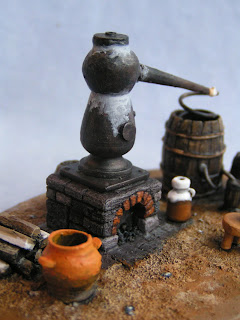 This image shows the Pot Still with the Grey 'Bloom' and the handles added to the earthenware pot. 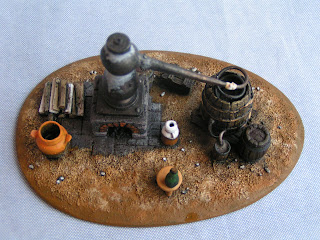 This final image - looking down, gives some impression as to how 'busy' this little scene is, with lots going on in a very small area. I am particularly pleased with the 'Bloom' and the way that the kindle has been painted.

In the final post (next week) I will show the finished terrain piece, varnished and flocked.

Fantastic, it's a great pleasure to look at this stunning work!
Phil.

Excellent work!
It should fit an alchimist's workshop! :)

A beautiful labor of love.