It has been a while, but here is another Flintloque inspired short story called The Troll Bridge which has been  penned by me. Details can be found over at Barking Irons Online, while this link will take you straight to the story.

The whole idea of the White Liar short stories were inspired by Uncle Rogipoos (the brave, heroic, handsome and adventurous alter ego of Roger Willcox, a regular contributor over on The Notables) and a desire by me to write some gaming fiction. The White Liar short stories are based in part on a Games Workshop Comic strip called Tales from the Ten-Tailed Cat which introduces characters and adventure threads to Mordheim and Warhammer Fantasy.

While the illustration below was drawn By Edward Jackson after an idea by me. The now famous White Liar at Broomcoat. 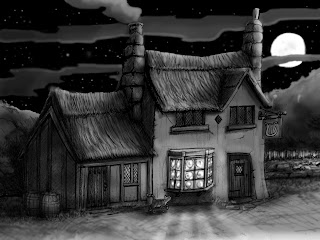 I hope you enjoy this (and earlier stories) - they are great fun to write and develop new gaming ideas - in this I have introduced Don Juan, a sharp-shooter Cacadores of the Al Garvey Army.