As part of the New Google Chrome program I am able to group different Forum pages onto a single reference screen and this has led to me re-visiting some older forums or sites of interest. One such page is The Miniature World of Joe Videki a link to his site can be found here.

While browsing the earlier posts or updates I came across a review of the book Blue and Yellow don't make Green by Michael Wilcox and published by The School of Colour. In essence it is a technical manual on how to mix just about any colour - Watercolour, Oils, Acrylics etc. But this is not the main reason for this post..... 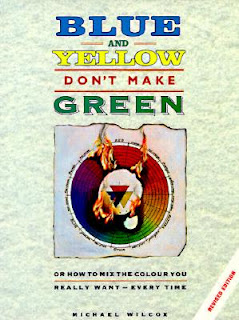 Many years ago, when my Son was still interested in painting model soldiers and building models with his Dad we would visit the Worcester branch of The British Model Soldier Society or BMSS. The meetings would be held at the home of Don Disley (one of the most knowledgeable modellers and figure painters it has been my pleasure to have met, sadly no longer with us). Modellers would come from as far afield as Leicester, Cheltenham, Shrewsbury and Birmingham and sit with Don around his living room table, to paint models, exchange ideas and read from Don's extensive library. Don's Wife would supply biscuits and tea while grown men (and children) would Oh and Ah at the latest model aircraft, tank or figure that was presented.

I was introduced to this group by a modeller called John Bowkett - who like a friendly Friar Tuck, welcomed new members into the group.

The cost for this priceless modelling education was 50p per adult, per meeting and as the saying goes "you don't know what you have till it's gone." I miss this camaraderie. Similarly it has been many years since I last saw John.

It was at such a meeting that I was first introduced to this book, borrowing it from Don, I was able to read it at my leisure before returning it.

Earlier this month when reading the Joe Videki review, I decided to search e-bay for a copy and earlier today my copy arrived. My version is the revision and not the original as lent to me all those years ago. But it has, as well as making me realise how much I don't know about painting and colour mixing made me think about those days sat around Don's living room table discussing modelling, painting and reviewing the latest Military Modeller.

Back to the review. Blue and Yellow don't make Green is a hard read - being in fact a technical manual on colour theory and how to mix colours, I would say that it is a book that you refer to rather than read from cover-to-cover, but for all that I would recommend it to all serious figure painters as the definitive reference work on colour and how to mix them.

It makes me realise that adding white to the base colour to lighten it rather than mixing a completely new colour is a bad habit that I have gotten into. I set myself the challenge last January to better understand both colour theory and colour mixing - maybe a year on I might get around to it.

I know this particular post has meandered a little away from a proper review - but I hope that you will forgive me this little indulgence. There are after all many reviews of this book on the Web. (for example).

It's interesting stuff. The sort of stuff we get taught at Uni! It's not bad to mix white with a base colour, but I know what you mean, it should only be used for certain things.
A habit I have is using paint straight from the pot (thinned, of course), we get told at uni to always mix our paints a bit! I don't do this for wargaming miniatures simply because of time.
Looks very interesting and that sort of meeting sounds like something that would just not happen anymore, which is a shame. I haven;t been to a wargames club for some time now due to the distance, Han not really wanting to go and various other problems and I miss it quite a lot, so I can sort of understand.

Anyway, hope you are well!
Rob

Hope the computer is a bit better. I remember going to one of those meetings too! Think I painted a small goblin and it's hidden away in one of my boxes in the garage :) xx

2You can combine those two things - computers and colour theory - in this modern age. Try a virtual palette - an online program where you "mix" colours and see the result. Not totally accurate; but good enough to master the basics of complementary colours, mixing greys etc etc. Here are two links to get you started:
Golden Paints.
WetCanvas.

Look at this!
http://offbeathome.com/2012/09/medieval-game-room
What do you reckon? xx