The Graveyard Book by Neil Gaiman

I'm a little late to the party with this review. The Graveyard Book was published back in 2008, won the Carnegie Medal in 2010 and according to the internet there have already been a number of failed attempts to adapt it for the big screen. I found the paperback book at a second-hand book store in Worcester last week and thought it was worth the £1.49 asking price. How right I was.

Although targeted at  at older children, the characterisation and story were flowing and engrossing. I sped through it from-cover-to-cover in less than a week of relaxing reading. 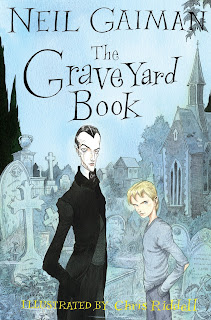 Like many of Neil Gaiman's stories what you first expect is not what you ultimately get. He has an uncanny ability to turn the common-place upside down and have you looking at a tale from the other end - a bit like looking down the wrong end of a telescope.

It is difficult to write a review without giving away the story, the back cover has these notes;
Nobody Owens, known to his friends as Bod, is a normal boy. He would be completely normal if he didn't live in a graveyard, being raised and educated by ghosts.

I really enjoyed the story and was disappointing when I finished it, always the sign of a good book.

Thought you might find this interesting (from the BBC's website), Gaiman's "Neverwhere begins on BBC Radio 4 on Saturday 16 March at 1430 GMT, and continues on BBC 4 Extra from Monday 18-Friday 22 March at 1830 GMT."

Sorry we missed on another at the show. I did ask after you.

Oo, I'll have to read it. And download the Neverwhere podcasts if they come up on the BBC! x

HI Tony,
Sorry we couldn't meet up (held up shopping at IKEA!) so didn't arrived until nearly 1pm. Next time perhaps.