Regular followers will know that work on the Flintloque Building Set was completed in February. I can now confirm that the set is not only available from Grand Manner, but the models are featured in the latest GM advert which appears in issue 270 of Wargames Illustrated. (Just released). The reason for the delay in me commenting on this until now, is that Dave at GM had informed me some months ago that he was to run a Salute 2010 offer - All orders placed in April 2010 and to UK addresses will be Post Free!
Full details are;
28/40mm Spanish Napoleonic town buildings - LS43, 44, 45. I would suggest that anyone looking to purchase this model/set orders in April and saves themselves the postage.
This building set is also suitable for 28mm and 40mm Napoleonic games, (in fact it think it maybe the first commercially available 40mm Napoleonic building!) I can also see the same set being used for Carlist Wars, and Pirate games as I have tried to make it as generic as possible. 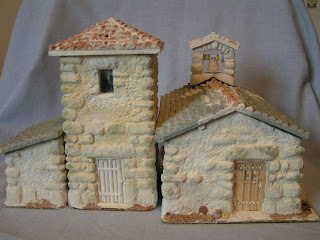 I will post photos of a painted example as soon as I have one completed. If anyone wishes to order the details are;
Grand Manner, Unit B, Smiths Way, Saxon Business Park, Stoke Prior, Bromsgrove B60 4AD. Telephone 01527 - 578766/558071 and e-mail; www.grandmanner.co.uk
In addition to the Flintloque Building Set/Spanish Napoleonic town buildings featured in the advert. I can confirm that both Hartwell Tavern (AMC80/81) and the European Windmill (ME34) were also modelled by me. In fact a fourth model, the 40mm Generic Log Cabin (AMC84) is also one of my sculpts.
I am also aware that a number of new Grand Manner models are due for release in April, Dave has set himself the target of producing 150 new models this year. I can confirm that he is well on the way to realising this aim and I am proud to say that some are by me. More news to follow.
Tony
Posted by Tony at 01:02

Great news Tony, well done guys at Grand Manner for getting them out!

Well, i can't say I will be able to order them before April, but they are bloody beautiful and will be near the top of the 'must buy' list.