This week, Dave Bodley at Grand Manner has released a photo on his shop page of the 28mm model of Hartwell Tavern that I produced earlier this year, see;
http://www.grandmanner.co.uk/shop/
The completed model is the largest 'master' I have so far produced being 360mm x 300mm x 150mm tall. The model includes, internal detail, lift out floors, lift-off roofs as well as stone and rail fencing.
I have been looking forward to releasing details of this model for some time, and now with Dave's comments and these photos on the GM site I am really looking forward to seeing a finished casting - a painted casting very soon. Full costs are not yet released, but I would expect it to be a limited edition model. I would therefore recommend that you place your orders as soon as possible. 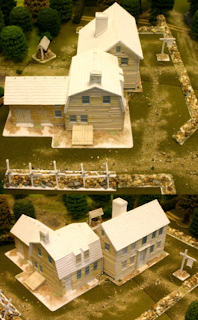 This photo shows Hartwell Tavern (on Battle Road), the subject of this 28mm model. 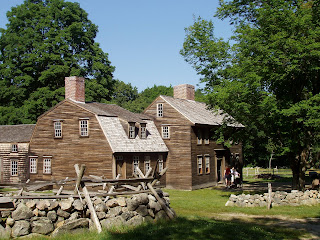 When Dave released the AWI/ACW 40mm building there were a number of comments and requests for similar structures in 28mm, Hartwell Tavern was chosen as the first of these releases as Dave had been given detailed photos of the building by Paul of Redcoats at War, see;
http://redcoatsatwar.blogspot.com/
In addition I have been helped in this and other AWI projects with comments from Brendan Morrissey.
Thank you, Paul for supplying them and I hope that the finished model meets with your approval. Thank you Brendan. There are plans for more 28mm AWI/ACW models to follow, please keep an eye on this Blog and the Grand Manner web pages.
Tony
Posted by Tony at 03:15