This particular post is not meant as a 'How To', more a reminder that at this time of year many stores will be selling battery operated LED Christmas lights, sometimes priced as low as £1.99 a set.

As an example of what can be done with these low powered and small LED lights - here is a single photo of a cut-away WWII ship - A Fowler Class Corvette which is internally lit with LED's. The image was taken at the recent IPMS Scale Model World show held this November at the International Centre, Telford. 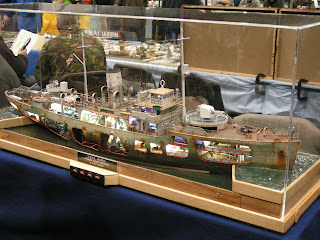 For anyone unsure as to what to look out for, here is an image of one such set of Christmas lights, run off three AA batteries. 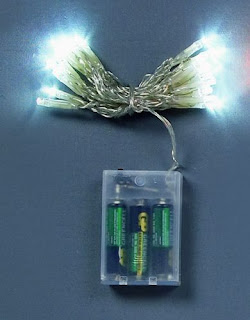 I have used LED lighting on one piece of terrain - The Amber Shrine, which uses orange coloured acrylic plastic as the core of the central standing stone or monolith. The acrylic box is filled with LED Christmas lights and the batteries are housed in a small box built in to the bottom of the terrain board. 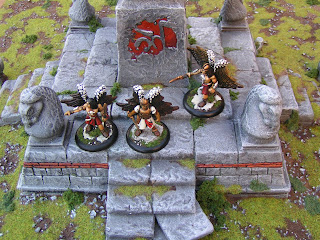 This final image shows The Amber Shrine lit from within and with the image taken in an unlit room, the effect is less striking than the cut-away ship in the first image, but illustrates how I used these cheap lights to illuminate a gaming board. Details of how I built and painted this skirmish terrain board can be found here. 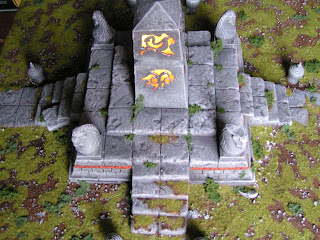 Other uses could be landing lights on a Sci-Fi rocket base or landing pad, a Cthulhu themed cave, A Victorian street scene or individual lights illuminating resin cast houses. The tiny LED's can be inserted into pre-drilled holes and due to their small size and low heat will be ideal as spot features on terrain.

I hope that this short post gets you thinking about how you might be able to use such lighting features and effects in your games or terrain pieces - buy them now as within weeks they will be gone.

Ooh, that's rather interesting. Cheers for that!

Wow, thanks to show the Flower class corvett pics, this old kit, always can be amazing