Dedicated followers of fashion. The three Halflings have finally got some 'kegs'. I have used the same technique for all three, just different colours. 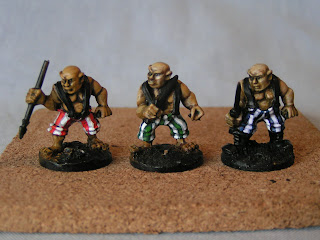 In the background 'fluff' for Pax Bochemannica it is said that particular tribes or gangs of Halflings will stick to one or maybe just two colours for their 'trews', I thought the mixed styles worked better and gives this small group of miniatures loads of character and colour.

The Boche Halflings were much easier and faster to paint than the Noman Orc Legionnaires and I look forward to painting more when the game S.P.Q.ORC - Pax Bochemannica is officially launched later this year.

I just LOVE those trousers! :o)