I was recently made aware of the BBC Radio 7 audio plays based on the early years of the Blake 7 characters. they were transmitted between Monday 31st May - Friday 4th June and were very good, fleshing out each of the main characters, their life, how they became involved with the resistance and giving some great background. They were very well produced.
This 1979 Blakes 7 Annual was picked up in a charity book shop last week, and although quite 'cheesy' brought back some very fond memories of this iconic BBC Sci-Fi series. 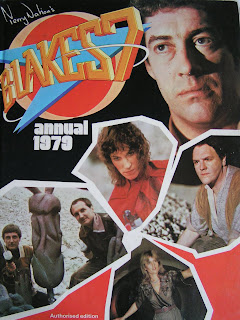 Crystal Gazing - the first of the stories offers an interesting gaming scenario;
The crew realise that their multi-directional Mauxite crystal has a hair-line fracture, the crystal is needed to operate the navigational computer and without it the ship would be lost in space. It is rare but not unheard of to damage a Mauxite crystal, but the crew must now find a replacement and fast.
The nearest suitable planet is Gamma Nine, which not only has a reserve of Mauxite but a breathable atmosphere. The spaceship accelerates to full speed and heads for Gamma Nine.
Unfortunately the crystal has now shattered and there is no option but to acquire a new one.
Upon landing they find that the planet is inhabited by a race of human-like beings who believe the crystals to be sacred, they will be very hostile to any intruders and if caught will probably kill you. On the plus side they are technically backward and are armed with spears and hand weapons, be aware there are too many for you to attack with force, no matter how well armed you are.
Once within range of the main settlement and crystal mine, the crew decide to split up and reconnoiter the area. At least one group are captured and they are taken by the inhabitants to a central arena where they are placed on a pile of wooden faggots, they are to be burned at the stake.
The priest or holy leader is dressed in an elaborate gown which is decorated with Mauxite crystals. The scenario calls on the remainder of the crew to save their colleagues and acquire at least one crystal before returning to the ship and proceeding on their way.
I would not expect there to be a fire-fight, the crew would see this as too aggressive and would prefer a more thought-through outcome.
In the Blakes 7 story Cally saves the day by sneaking up behind the four bound captives, loosening their bonds and returning their teleport bracelets, Vila steals a crystal and they return to The Liberator safely.
I am sure that there are other options, but I found the story just screamed Fantastic Worlds Scenario at me. The Crystals could be the scenario objective, throw in a couple of 'red herring', for example a crystal may be easily found, but also flawed and therefore useless, similarly Mauxite crystals are very valuable and picking up more than one, could prove beneficial in future scenarios.
If anyone tries it out - please report back.
Tony
Posted by Tony at 01:00

Blake's 7 was such a great show! I wish it was more popular in the U.S. so they could release it on region 1 dvd.

Hi Tony, well that's certainly a blast from the past! Has to be my favourite sci-fi show, witty as well as intelligent, with properly drawn characters rather than the stereotypes you so often encounter nowadays.

Had to have some of the best Theme music ever, too!

Have you heard the BBC Radio 7 Blake 7 radio or audio plays?

They were very well done and concentrated on building the characters prior to meeting Rog Blake.

You should be able to pick them up somewhere on the Net.