Following on from my previous post, I felt so embarrassed at not painting my own Foul Mouth Freddy, that I immediately set about painting and finishing this example........... 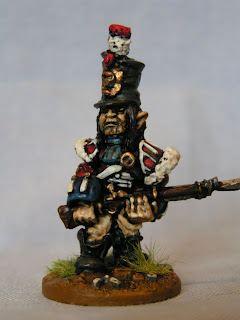 Photo Two - Shows the VLE Foul Mouth Freddy from Alternative Armies, number 28 of 250. I sculpted or more accurately modified a couple of existing AA miniatures to produce this master. AA then moulded and cast the miniature and have released it as a Very Limited Edition release, just 250 castings before the mould is destroyed. 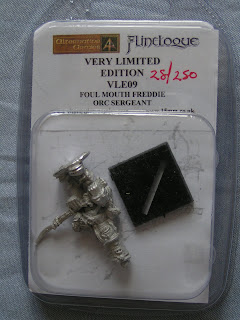 Photo Three - The bare casting. You will note that the plume on the top of the Shako has been miss cast. 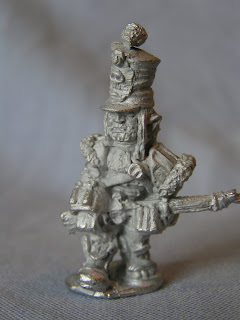 Photo Four - The based and repaired casting. I used Milliput for the groundwork and repaired plume, with sieved sand for the base texture. The miniature is based, not on the square, plastic base but on a 2p coin (as are all of my Flintloque miniatures). 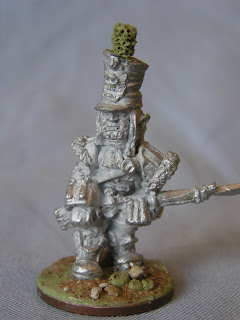 Photo Five - The miniature, part way through painting. I had intended using this miniature as yet another On-Line Build. But as stated above I just felt that I needed to get this figure painted and photographed as soon as possible. 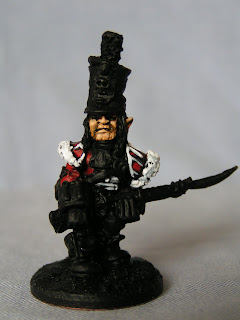 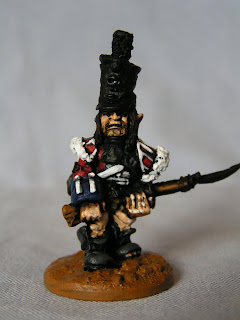 Photos Seven and Eight - Show the finished Foul Mouth Freddy, based, painted and varnished. I think it has come out OK (considering the speed and haste that I painted him). 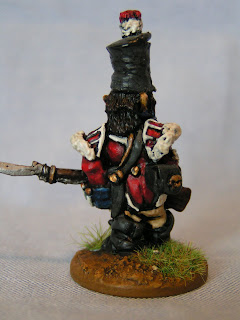 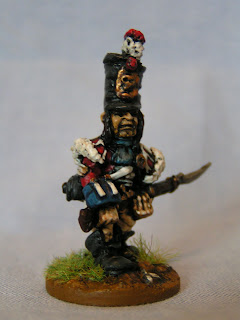 My earlier posts already give links to the Orcs in the Hills (OITH) articles/scenarios and links to the AA site, so I will not repeat them here. But please check them out. I will be putting together yet another FMF story and scenario very soon.
Tony - a less embarrassed and chastened Tony
Posted by Tony at 04:15

I was under the impression that Foul Mouth Freddy was one of Alistair Campbells spin doctors?

One of the 7 dwarfs on steroids. I'd hate to see Snow White :)

But need to pick you up on two things from the posting.

2. The shako plume is not miscast, it comes out like that, for that be the way you did make it!

I believe what Tony means is that the plume has shifted in casting. This is probably because the piece was not sufficiently pinned. Being so small, it probably ripped off in the moulding.
As you've told me, stuff usually shifts a bit in moulding, especially with converted miniatures rather than originals. To fix mine, I cut it off and repositioned it to the position that seemed 'right'.

Tony, sorry it's taken me so long to reply, but it looks excellent, a very well done!!!

Great to hear from you again. I hope everything is OK.