It's been a while since I up-loaded any articles related to modelling figures for my Flash Gordon collection, this figure, The Rocketeer, is a much modified 40mm Graven Image casting which has sat on my desk for some considerable time. I decided this weekend that it was about time he was painted and finished. I re-based him on to a 40mm round base and built up the base with DAS modelling clay, the helmet fin was re-modelled as the original conversion had been damaged and I painted him as the Classic Rocketeer character. 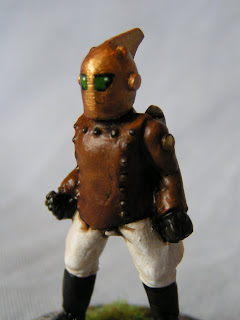 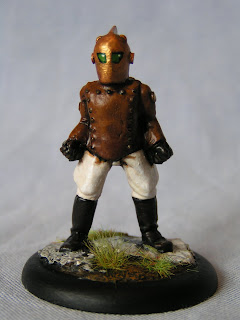 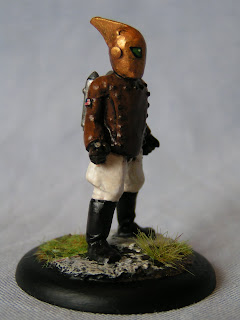 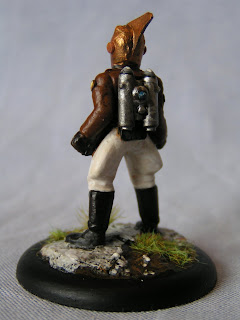 The rocket pack was scratch built and the leather jacket re-modelled with Green Stuff. The original helmet had 'goggle-type' lenses, but I filed these off (at a very late stage), preferring the 'sun glasses' style instead.
I have no idea how he will be used in my Flash background, but at least he is now painted, although I think I could have done better with the gold helmet - I do like the stance.
Tony
Posted by Tony at 01:51

I agree the stance is great--he's ready for action!

Why can't the rocketeer make a guest appearance on Mongo? Perhaps he is thrown through a rift in space and time and Flash must help him return home.

It is its own series of games!

That's a great rocketeer! I love that movie and I have several figures with US Army weapons! The Thompson SMG with the drum magazine really looks good with that jacket and helmet.