Foul Mouth Freddy is now available to purchase from the Alternative Armies web pages, see;
http://www.alternative-armies.com/New_Releases.htm
This illustration is taken from the Rambling Corner, a 'spiffing' Blog by Rob Alderman, see;
http://robsramblingcorner.blogspot.com/ 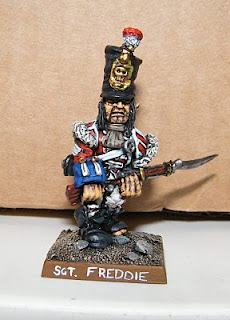 The miniature portrays that fine Albion Orc Sergeant Freddy, whose adventures are now chronicled on the Orcs in the Webbe web pages, see;
http://orcsinthewebbe.co.uk/index.php/flintloque/scenarios/458-foul-mouth-freddy-saves-the-ing-sheep
and
http://orcsinthewebbe.co.uk/index.php/flintloque/scenarios/424-foul-mouth-freddy-spikes-the-ing-gun-
The miniature was sculpted by me - well converted by me and cast by AA as a Very Limited Edition miniature of just 250. If you want one - you had better act fast! I am still to paint my copy and have used Rob's illustration as I feel he has captured in paint, this character better than I ever could. Thank you Rob.
I am sure further adventures will follow, but for now it is great to see the painted miniature. Full details are; Foul Mouth Freddy - VLE 09 £3.50. A Flintloque profile is available here;
http://www.alternative-armies.com/VLE09_Foul_Mouth_Freddy.htm
On a personal note - it has been some time since I first wrote on my own Foul Mouth Freddy, Flintloque conversion. Comment here on this Blog led me to reproduce the conversion and AA were kind enough to mold and cast it. Maybe one day it will become as famous as the very rare LE 01 Obidiah! We can but hope.
Freddy is loosely based on an old family friend, who is sadly no longer with us. I wonder what Uncle Fred would think about being immortalised as a VLE Flintloque miniature? I am sure the answer would not be printable!
Finally - thank you to all for the encouragement, now that the miniature is (officially) available, I can talk about it openly.
Tony
Posted by Tony at 06:50

Sorry for the lack of recent postings!
I have been busy pushing the green stuff around, dabbling in the dark arts that are Warhammer Fantasy Battles and working terrible shifts with those evil slavedrivers burger king!

Thankyou for mention of my model! :) You did a great job sculpting it and it did paint up wonderfully. I had a great time painting it.

I really look forward to seeing yours, I hope you paint (and convert perhaps) a few of these miniatures in a variety of ways! You have a nack for painting things with a true sense of originality.

Well done on getting the miniature out and I look forward to not only seeing more of your work on the market, but more of your articles based around this brilliant and original character!