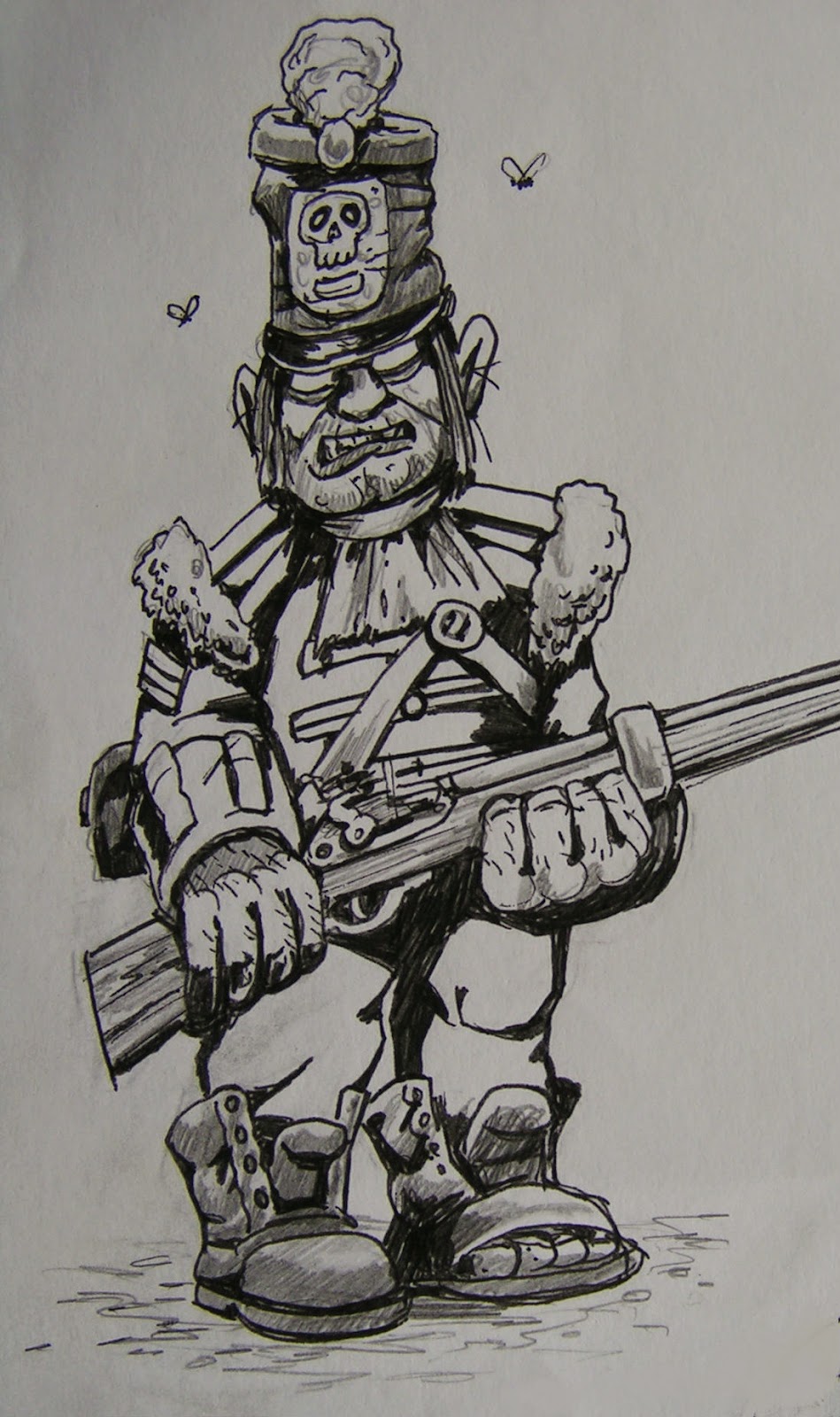 Foul Mouth Freddy Fools the ****ing Ferach
by Tony Harwood
Foul Mouth Freddy returns in this cracking tale involving a small group of inexperienced Orcs going up against a full section of Ferach with only Freddy's bl**dy brilliant plan between them and a horrid death. May Sentinel help them all.
-
Throughout the land of Algarvey there are few landmarks as well know as the Tower of Badlan. A huge red structure that guards the two main roads into and out of the sea port town of Jaree. In days longs past the tower was reputed to have mystical powers, but in this more enlightened time of Black Powder and the reign of Kyng Gorge, ideas of magick and mysticism are treated with much disdain and contempt.
The tower itself is situated just off a fork in the road near Jaree. The main road comes out of Jaree from the West and continues East towards the main built up areas of Murian, crossing a large bridge that spans the river. A second and lesser trod road meanders North-East through small hamlets and steep valleys following the course of the river continuing towards lush farmland to the East and far off valleys full of vineyards to the North.
Originally built as a fortified toll house the tower is tall enough to see in all directions thus protecting both the main trade routes and the river crossing. In times gone by a toll of one groat was levied on all travellers who passed by and due to the diligence of the tollhouse keeper and a small armed force he retained using the monies generated, the roads around Jaree remained clear and safe.
The tower’s nick name, Black Jack’s Tower, came about a short time after the Mordredian wars began. The original tollhouse keeper and his unit did not stay in the tower after the Annulment of Wylde Magick for reasons history does not know but, soon after, a new keeper took up residence. An Ostarian by the name of Jaques. Jaques was a huge black Pyrenean mountain dog, an ex-soldier of the Ostarian Army. He was very good at his job and over time the people of Jaree grew to know Jaques who, despite him being a heavy drinker, was fondly thought of by all for his many acts of heroism. It was said that Jaques had saved the lives of over a dozen townsfolk who (either by design or accident) had fallen in to the river. Black Jack, as he became known, is sadly long gone, but is remembered to this day with a stone cairn next to the tower and a small plaque detailing his many rescues.
Now, as our story begins, the tower lies empty and the roads are a lot less safe for travellers to Jaree.
Foul Mouth Freddy (our titular anti hero), Mad Micky Hooligan (a Guinelean Bog Orc of very average stature) and Kenny (a banjo playing Orc of Albion with a mouth only just a hint sweeter than Freddy’s) found themselves travelling south along the river towards Jaree to take part in an inter-regimental game of Kricket. A popular Albion sport involving smacking a grenade with the stock of an old Flintloque and seeing whose white flannel trousers could get stained the most. Catches and being stumped also had a part to play in traditional Kricket – but as you were only ever stumped once (a very very painful procedure indeed) this rule lapsed somewhat. Similarly, the unofficial (but remarkably popular with players and spectators alike) practice of tossing live and lit grenades at the batsmen has also all but disappeared. It was seen as ’just not Kricket’.
In preparation for the big game the three stalwarts of the Grand Alliance were transporting a wagon full of old flintloques and a couple of boxes of old grenades. As a lot of Freddy, Micky and Kenny’s time on the journey had been taken up by drinking and singing luckily, for the Kricket supplies, they were also accompanied by a handful of very raw Orc recruits and a Dwarven wagon master, Viragio, who had himself seen a bit of action during the Dwarf Sauerkraut Wars.

Why does the story of "Black Jack"
and his rescues ring a bell? Could it possibly have something to do with a pleasant little hostelry called "The Swansea Jack" in the nearby hamlet of Swaenseye, Iwonder.