Following the last post, I have been thinking about using hexagonal bases for this Cross & Crescent Aeronef project. The construction and painting of the first Ottoman Nef and other models led me to build a couple of hexagonal bases from bits I had in my 'spares' box.

First we have the two new bases, which are 40mm across the flat sides. 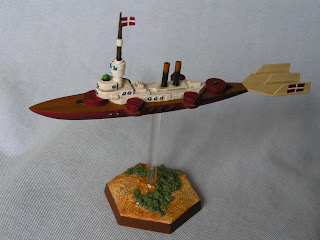 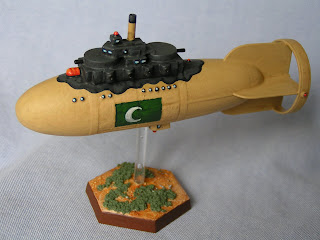 This photo shows the clear plastic Games Workshop bases, which in my opinion were too small (unstable for such large models) and not tall enough. 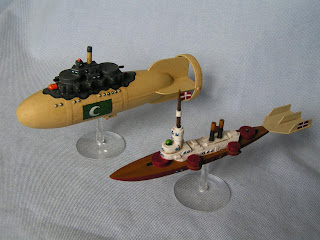 Finally, here are the parts used. A 40mm Lord of the Rings CMG figure, a metal washer and a clear plastic cocktail stirrer.
The figure was removed from the hexagonal base (I have a separate project, re-painting these soft plastic figures and mounting them on to GW 40mm round bases, see earlier posts). The metal washer was super glued to the base and a hole drilled through the base to take a section of the clear plastic rod, which was cut from the cocktail stirrer. When the glue had set, DAS modelling clay was built up over the washer and sand was glued to the base. Once the painting and varnishing was complete, ground foam was glued to the base in a haphazard pattern. 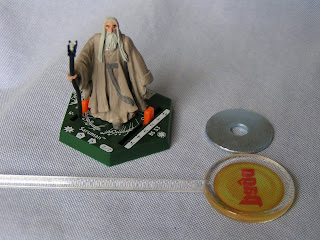 My plan is to produce coloured name plates, which will be glued to plastic card and stuck to the bases, but this will have to wait until I am sure this is the style of base that I want.
Tony
PS.
I think the scratch-built, textured bases look much better than the GW clear plastic flying bases and I have now constructed an additional five, and mounted all of the Lepanto Aeronefs on to the newer style bases. In addition the larger bases are a whole lot more stable.
Posted by Tony at 04:28

I think the hexagonal bases painted with the Bestial Brown sides 'look wrong' and I am thinking of painting the sides Black.