The Knights of St John fleet is finished (see earlier post), I have a group of Papal States Aeronefs built, but not yet painted but I thought it was time I built and painted one of the Ottoman Nefs, to test the style and colour scheme.

I wanted the Ottoman Nefs to appear completely different in style to the Knights of St John, more 'Dig like', more 'old fashioned' and with modelled features that would make them instantly recognisable. The answer was bullet-like bodies, big tails and large, flat turrets.

These three photos give an idea of what I was looking for. The style and colour scheme is very different from the Holy League ships - plainer, with less gun turrets and a simpler structure. 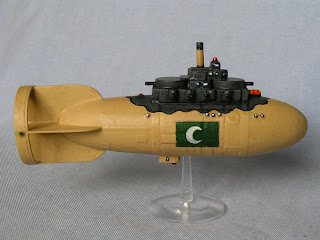 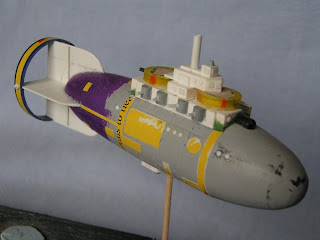 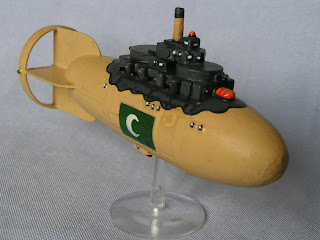 Construction was based around a thick 'bubble' pen and a section of NASA space rocket. The main turrets are much larger than anything I had previously modelled and are made from pen barrels filled with a section of pencil and filler - then sanded smooth.

The colour scheme is much less bright, but the dark grey 'Mickey Mouse' camouflage around the superstructure adds some variety (I may keep this idea for future Nefs) while the Green Ottoman Naval Ensign was culled from the Internet and hand painted.
More to come.......
Tony
Posted by Tony at 02:04