The Ultimate Modeling Guide from CULTTVMAN

The card-backed book does exactly what the book cover says - it guides you through the construction and painting of some of the iconic space-craft, vessels and characters of the classic Sci-Fi film generation.

To give an idea of what to expect, the first article in this 152 page book details the construction, modification and painting of the 'Bullet' space rocket from the 1902 film by George Melies called Le Voyage dans la Lune (A trip to the moon). This is based on the resin model by Herb Deek's, (check out the Flash Gordon space-rockets from the same manufacturer) but with a modified hull and a scenic base - reminiscent of the original black and white film.

Other articles (there 18 separate articles), including; Flash Gordon, Planet of the Apes, 2001 - A Space Odyssey, War of the Worlds, 20,000 Leagues under the Sea etc. Check out the cover photo below. 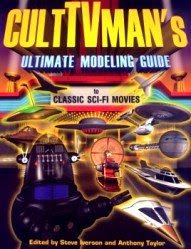 When I saw the cost, my first thought was that this was an expensive package, however the book was on sale and with P&P to the UK cost me $24.00. Upon delivery, my first impression was not good, a quick flick through and I was wondering if the sale price and OK shipping charges were still too high. However, once I started reading the very detailed construction notes I was smitten. This is a fantastic book for anyone interested in Sci-Fi modelling (or Sci-Fi model history) and now, as I near the end of the book, some article have already been re-read and re-read again, I feel this is a book that I can fully recommend.

The full details are;
CultTVman's Ultimate Modeling Guide to Classic Sci-Fi Movies by Steve Iverson and Anthony Taylor, published by CultTVman Media and first published in June, 2002. The ISBN No. is ISBN 0-9701455-1-9

For more details check out; http://www.culttvmanshop.com/shop/

Taken from the book cover; For model builders with imagination! CultTVman presents Rockships and Robots, Spaceships and Submarines from the furthest reaches of space, the depth of the ocean, the inside of the human body, and even the distant future. This book will show you how to build, paint and detail those fantastic models from 100 years of classic science fiction movies like Flash Gordon, War of the Worlds, Forbidden Planet and 2001: A space Odyssey. But that is not all! This book has something for everyone. There are models from The Time Machine, Fantastic Voyage, Planet of the Apes and Star Trek: The Motion Picture.