Many of the smaller states of the Confederation of Finklestein had considerable difficulty in raising standing armies, equipping them and arming them. One answer was to forge close links with allied States or Duchies and even raise combined regiments of Dwarves and Ogres, or Dwarves and Dog Soldiers. One such regiment was the 3rd Nassla - Houndsormstadt Line which combined a roughly equal mix of regular Dog Soldiers and Dwarves.

The unit fought with some success on both the Witchlands campaign and the Sauerkraut Civil War, however doubts were continually raised as to the loyalty of this particular regiment and the Ferach hierarchy were always finding reasons why this company should be found picket duty or based behind the mainlines guarding the supply wagons! 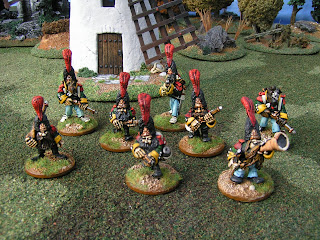 The miniatures are a group of converted Dwarves and Dog Soldiers from various blister and box sets, with helmets taken from Ferach Grenadiers of the Gardes (51016). The uniforms were painted green with yellow facings.

The Windmill model in the background is a scratch-built model which should appear as a construction/terrain tutorial in the next Flintloque Compendium/60 Bloody Rounds.

Tony
(More details can be found in the article; Ich Hatt'einen Kamaraden, Flintloque Miniature Catalogue.)
Posted by Tony at 14:11

Fantastic looking unit! Thanks for sharing!