Part Two has come around much quicker than I had expected. Both my Wife and Daughter are 'under the weather' and just want to be left alone! I am afraid I have been relegated to the shed at the bottom of the garden, modelling and listening to the radio. "Oh, well we all have to make sacrifices!"

Photo One - As last nights posts, but with some of the individual stones pressed in with a small section of Balsawood and the window and door areas filled with DAS. 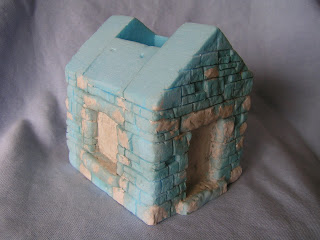 Photo Two - Following the Baueda prototype (see earlier post), the roof is made up from slabs of stones. I had planned on modelling the stones from DAS, but in the end, I sliced some dried bark in to small slabs and added them to the roof with PVA/white glue, pinning each piece with a dressmakers pin.

Once modelled, I used DAS to fill the major holes and coated the whole roof with diluted PVA glue. I think the success (or failure) of this technique will be seen when the model is painted. 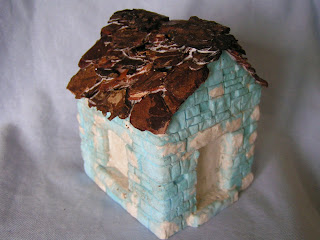 Photo Three - Mounting the warehouse model on to a kidney-shaped base and building the ground-work up with even more DAS. The three paving slabs are thin sections of Blue Foam and the barrels are resin castings (manufacturer unknown).
You can also see that the door and window have been filled in with strips of roughly cut Balsawood, detailed with some sliced plastic rod. 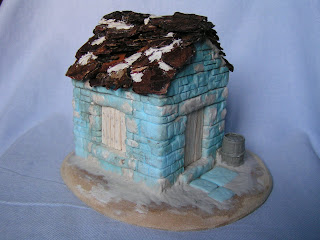 Photo Four - There is still a great deal of detailing work to do, but so far another one and a half, to two hours of work and the main building is complete. 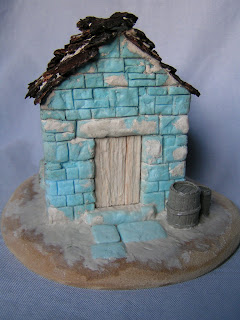 Once again, I'll keep the WIP diary going, but cannot predict when more work will be done.
Tony
Posted by Tony at 11:39

How noble of you to make such sacrifices for your family :)


I really like how that building is coming along.