With their love of fine living and particularly cake, the royal house of Battenburg had many enemies amongst the common Dwarves, after one rather unsavory incident when sour dough was thrown at the state coach, a guard regiment of loyal (and very well paid) Dwarves was raised. Later this regiment was renamed the Battenburg Palace Guard, and although the ceremonial duties, what few remain are now carried out by the junior member or support troops. The regiment, its fine history and background live on.

Amongst Dwarven Regiments, The 'Sponge-cake Guard' have indeed been the butt of many jokes, however their performance in the border wars and in particular their stalwart actions against the Ferach has won them great admiration and respect. 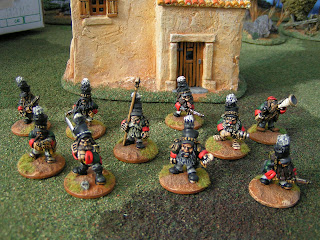 This group of ten Guards is made up of a mixture of dwarf miniatures from a number of different Flintloque blister packs with small conversions and detail added from 'green stuff'. The uniform colours of bottle green jackets, red facings and grey trousers is similar to Jager or Elite uniforms of the Confederation Army, however this regiment, in the main is armed with the standard mkII Dwarf musket and is classed as Average.

The battle cry is; Have a piece of (cake) this!