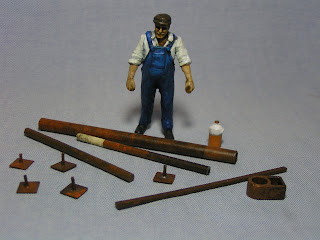 Another post of bits and pieces. From left to right they are; scaffold pole bases. I had seen these at a local building site and thought that they were worth modelling. They are used as bases for the scaffold and are simple metal plates with an upright pole or spike that fits into the bottom of the poles. They were made from plastic card and plastic rod. The thinner poles/tubes are plastic tubing, while the thicker pole/tube is from the barrel of a pen. The cider bottle to the rear was 'turned' on a Black and Decker hand drill from a section of plastic rod while the square section rod to the front was a section of plastic coat hanger. Finally we have a metal fitting which was cut from a KNEX building toy. Most were painted in the Vallejo Color Charred Brown and Hot Orange mix detailed in earlier posts then varnished with matt varnish.