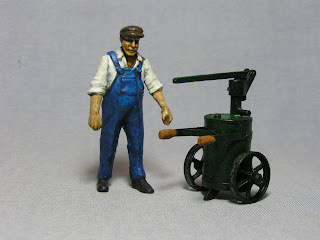 Many of these scratch-built models were built while sitting in the shed and listening to the World Cup on the radio. I found that these simple and easily made pieces of clutter were the perfect accompaniment to the many hours of radio coverage and the hot dry weather. Today's post is a water carrier which was inspired by one I had seen on The Severn Valley Railway. It was built from a section of plastic tubing, wheels from a 1:43.5 scale tractor model and bits from the spares box. The handles were made from some spare aluminium sheeting which was curved around a paint pot and glued in place with superglue. 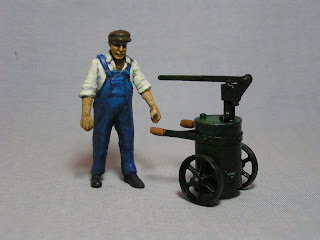 Painting was done with acrylic paints and dark washes. I varnished the whole model with a mix of Matt and Gloss varnishes while the weathering was done with a graphite pencil rubbed around the edges and some watercolour pencils.