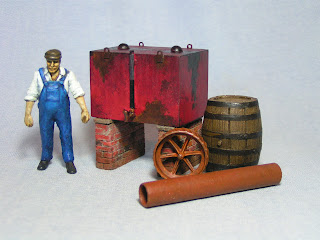 Here you can see one of the largest pieces of clutter I have made for the narrow gauge layout, a steel oil tank. The model was based on an oil storage container that I had seen in Upton-on-Severn in Worcestershire it is built from plastic card around some LEGO bricks with detail from more plastic card, plastic rod and a couple of cut-down pen tops used as vents. The brick base was constructed from green foam, the brick pattern inscribed on with a scalpel and the point of a sharp pencil. It was painted with acrylic paints with much weathering. I chose to paint it red rather than the more usual green.

To the side you can see a large resin barrel that was sculpted by me (details can be found in earlier posts). The metal wheel was from a 1:43.5 scale tractor that was picked up in a local charity shop while the pipe is a section of pen barrel.