In a series of clutter themed posts which are planned to run throughout August I will demonstrate what materials I have used to model such items and how I have painted these various pieces of 'clutter' which will at some stage be added to the finished layout. 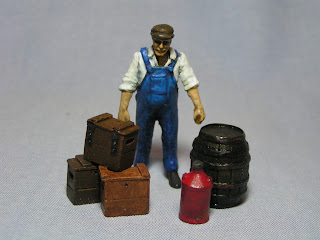 In part two you can see some more Schweppes boxes, a resin barrel and a petrol or oil can. The boxes were scratch-built as detailed in the earlier post and painted in the same way but with a slightly different colour palette of darker brown and an orange brown before being washed with a dark flesh wash and matt varnished. The wooden barrel was a resin casting from my spares box and originally intended to go with some 40mm metal figures. I painted it in a slightly darker black/brown colour with dark metal banding which was accentuated with a graphite pencil to add a metallic shine after varnishing. The petrol can was scratch built from a knitting needle which was turned in the chuck of an electric hand drill. I used a variety of different tools to carve the shape before polished the plastic with some fine abrasive paper. Detailing was added from sticky-pack labels and plastic card/rod. It was painted with acrylic red paint and washed with a dark brown/black wash before being varnished. I have used the graphite pencil to once again add a metallic sheen to the egdes.