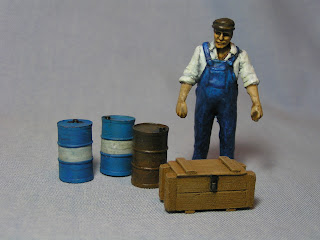 More Boxes and Oil Drums. In both images the oil drums are 1:50th scale resin castings which were bought from E-bay. They were intended as wagon loads for 1:50th scale Corgi die-cast lorries and were ideal as smaller oil containers in the 1:27.7 scale. They were first washed with soap and water and then sprayed with Humbrol MAKES PAINT STICK as the resin was a little oily.

In the first image you can also see a scratch built wooden toolbox, which was made from layers of 3mm thick plastic card and detailed with thinner plastic card before being painted with acrylics and washed.

The second image shows more 1:50th scale oil drums and three resin boxes from Reaper (Bones) which are intended for 1:56th wargame figures. Once again painted with acrylics and washed before being varnished with Galleria Matt Varnish. The label was cut from the Waitrose wines and spirits guide, mentioned in an earlier post. 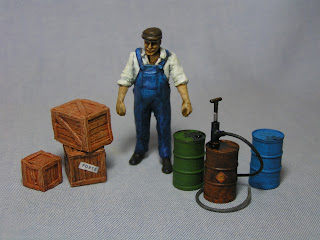 The oil drums were painted with an old and rather dilapidated brush and some make-up sponges with the acrylic paint applied in layers and with a stippling action. I have found that this gives an effect close to airbrushing and is much easier to blend than using a brush alone. The oil pump was constructed from various sections of plastic tubing and a piece of electrical wire. The SHELL logo came from a decal set I picked up at a car-boot sale some time ago and was applied over KLEAR (Future in the US) before being matt varnished. The oil stains on the top of the oil drums was done by adding dark brown and black acrylic paint to Klear and applying small drops to the top. In some instances I add another layer of Klear to get a better wet gloss effect.