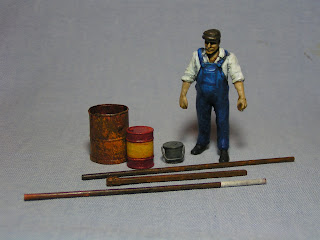 Today's update shows even more bits of clutter for the 1:27.7 scale layout. The larger, cut-down oil drum was scratch-built from an aluminium food tray, the smaller drum and green bucket were from the 1/35th scale Italeri Field Set while the metal poles are various plastic rod and strips, either shop bought or scrap plastic from the spares box. In all cases the painting was brush painted or sponged-on acrylic paint with washes of 'flesh' or brown coloured washes. All of the items were varnished with Galleria Matt Varnish and I have used some rust weathering powders on the larger drum.