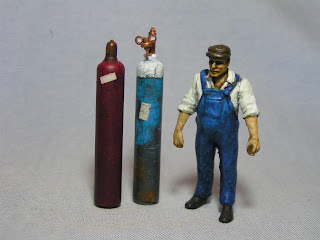 The two gas bottles above may look like the ones from the 1/35th scale Italeri Field Set, but they are in fact scratch-built using large plastic knitting needles that I 'turned' on a Black and Decker hand drill using pretty rudimentary tools. The caps and dials were scrounged from the Italeri set and glued in place with superglue. Painting followed my usual basecoat of acrylic paints then blending with make-up sponges before detailing and weathering. The labels are small rectangles of paper glued in place with PVA glue before being matt varnished.

In contrast, the bottle and drum in the image below were taken straight from the Italeri set. The gas bottle was painted in a similar way to the ones above, but the weathered oil drum was a new technique using a coarse natural sponge to add the rust and the white paint. At first, I thought that I had gone a little over-the-top, but now I look back at the weathered oil drum, I think I could have gone even further. 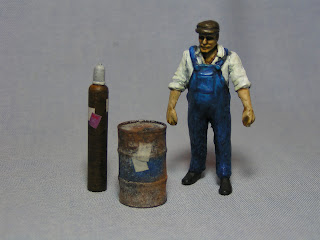 Once again the labels are small rectangles of paper applied with PVA glue and then matt varnished.