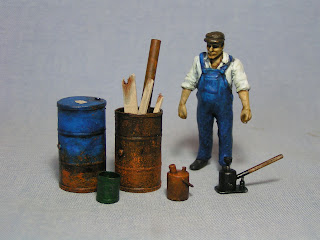 The two oil drums are scratch built pieces made from aluminium food trays as described in this earlier post. These were my first attempts at impressing and rolling the foil and as such are experiments that although look OK are a little out of scale or too tall. The blue oil drum was made using the same techniques as the green and yellow oil drum but is taller and not so wide. The rusted example is the right height but again not quite wide enough. Both were painted with acrylic paints and washes. I have been experimenting with different rust powders and these have been applied to both oil drums.

The small green bucket is made from the same aluminium foil, but rolled around a smaller tube, while the oil kettle and jack are from the 1/35th scale Italeri Field Set. The jack is modified with a longer cocktail stick lever painted and washed before being varnished with both matt and gloss varnish.