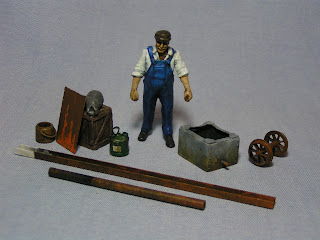 Another load of bits for the layout. Starting on the left, a small pot made from the Italeri Field Kit, then a sheet of metal modelled from a piece of plastic card both have been painted in a weathered and rusted metal colour using a Vallejo Charred Brown and Hot Orange mix applied with an old and rather decrepit brush. The wooden packing case is a modified Reaper Bones box/crate with a Milliput sack added to the top at the side is another oil can made from a pen top. The handle is made from more aluminium strip, this time painted green with a simple paper label glued to the side. On the right we have a galvanised metal water tank which is scratch-built from plastic card. It was inspired by a similar water tank that I saw and sketched while visiting Avoncroft Museum in Bromsgrove earlier in the year. The sides were distorted after heating the model over a gas cooking ring then pressing the plastc with a bamboo skewer. It was painted with acrylic colours and matt varnished. The rusted wheel set is from a Peco kit while the larger metal beam to the front is a section of Plaststruct H section, it and the plastic tube (found in the bits box) are painted with the Charred Brown and Hot Orange mix as detailed above. I have then used some Humbrol Rust weathering powder (AV0008) on the rusted items. This is lightly brushed on with a fan-shaped brush that I keep just for this purpose.