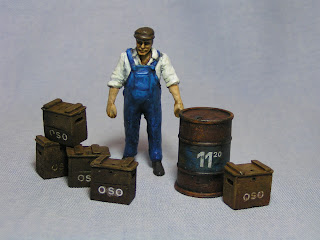 The first of this series of Blog posts relates to the wooden boxes. The as yet un-named layout will portray a chemical works alongside a canal and I wanted to add some boxes as clutter. I looked at Shell Motor Oil container boxes, but in the end decided to copy Schweppes soda syphon boxes (as can be seen in the last image).

The boxes were made in bulk from a couple of strips of thick plastic card (the sort of plastic that advertising signs are made from) then cut into small box shapes 13.3mm wide x 9mm deep and 12.9mm high. The surface detailing was done with sandpaper and scoring with a scalpel. The hand holes and locking hole was drilled-out with a Dremel and a pinvice while the wooden supports and lid were more plastic card glued in place with superglue. 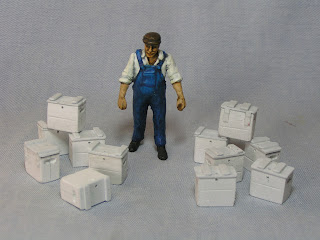 In this third image you can see the sketches and a completed box. The image is taken from my project book which is crammed full of sketches, plans and images. I will post more on this in a later update. 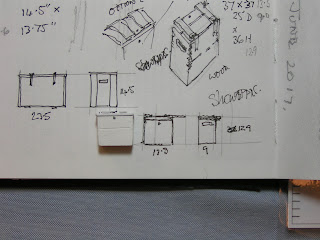 Painting was done in batches. The first five being basecoated in dark brown before being drybrushed in a dark brown/Ochre mix and then washed in a dark flesh wash. Detailing was picked out in black with a silver highlight and the OSO logo was added with Letraset white letters.

I will give details of the oil barrel in a later post.