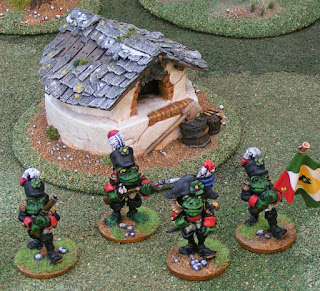 The first post of September 2015 is this scratch-built Bakehouse or Oven. The model was inspired by this illustration found in a book on French regional architecture. The ovens or fours banals were communal ovens and usually built my the landowners or Seigneurs who both charged the peasants for using the ovens and supplied the grain (for the bread), therefore at every stage of bread-making the Lord profited.

By the 17th Century, many villages, and later individuals built their own ovens. There were two types - four (oven) and fournil (bakehouse). 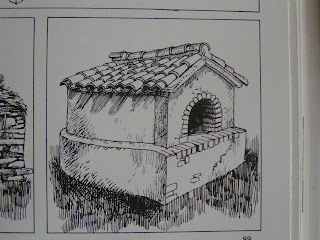 The oven continues my promise to have the first post of each month as a NEW terrain model. To see the others use the Terrain Gallery label to the right.

The model was built over roughly shaped blocks of Blue Styrofoam covered in DAS modelling clay. The roof was built from wooden chips cut into small roof tiles over a lollipop stick base. 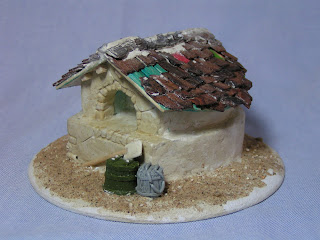 It was based in my usual manner - on an oval of 3mm thick plastic card with the base or groundwork built up with more DAS. 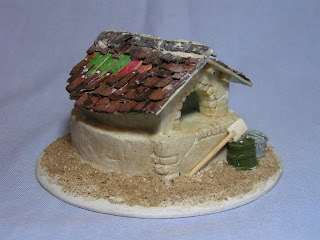 Detailing was from my 'spares box' or scratch-built. 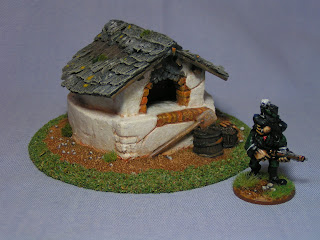 Once painted, I varnished the model with Galleria Matt Varnish. 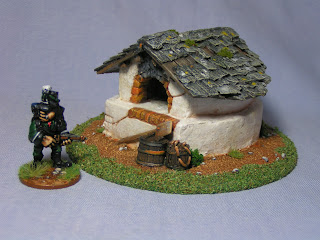 The roof was further detailed with small clumps of moss (ground foam) while the groundwork had some dyed sawdust or railway scatter added over uPVA glue. 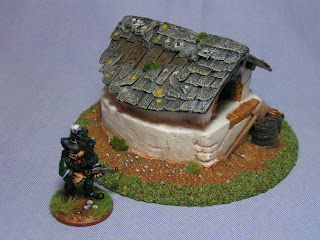 Although this is a small piece of terrain, I believe it is a very good representation of the original sketch and another characterful model. The Flintloque miniature is 35mm tall (bottom of foot to top of Shako plume).

I can smell the aroma of cooking from over here! Lovely work sir.

Excellent! That is really very nice :)