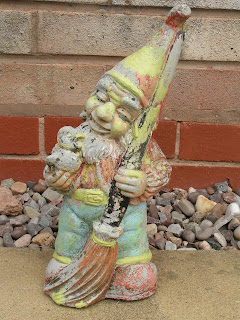 After jet washing the concrete Gnome there were many areas that looked like they had been either washed away or damaged. I think the jet washer was just a little fierce.

I decided that it was time for some running repairs - a 'nip and tuck'. I mixed up some Milliput epoxy putty and set about both repairing the pitted surfaces and adding extra detail. 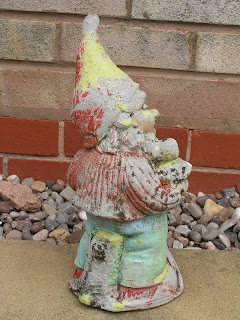 Most of the sculpting was carried out on the hat and face. I was trying to be subtle and didn't want to add too much putty.

In the first image - you can see how I have now added a belt and buckle - he now has something to hold up his trousers! 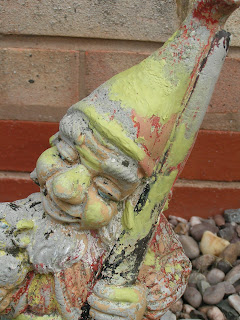 This reminds me of how badly some of my older nutcrackers need repair. I have some twenty or thirty of the buggers, from when I was a wee lad to relatively recently. They live in a box until Thanksgiving, then come out until the end of Christmas.

Some are forty plus years old, and in dire need of restoration. Maybe this year...