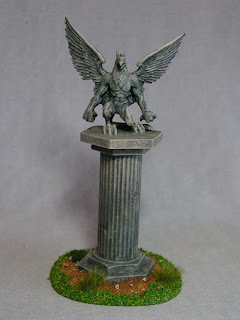 You would be hard-pressed not to have seen and read about the phenomenal rise of the latest Osprey publication/game Frostgrave. I have already written a Blog post detailing how I purchased a copy the first week it was launched.

Since then I have been planning how to build my own band of adventurers as well as passing the book around a group of select gaming friends. One such acquaintance and work colleague, Mike has even gone ahead and purchased his own copy.

Mike and I are planning a game very soon and we are both actively searching out suitable miniatures and building Frostgrave inspired terrain. Most of the terrain I have built for Flintloque could work, but even so I have started a couple of new terrain building projects. This simple statue is one such article and I hope that it is of use to others.

Image Two - Searching through my 'spares box' I came across this Monster-in-my-Pocket creature, a winged and eagle headed humanoid. I also pulled out this plastic cake-decorating pillar. A good starting point for some Frostgrave Statuary..... 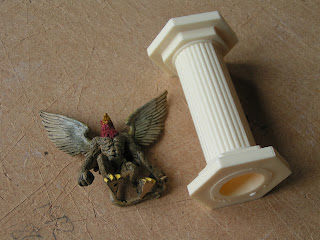 Image Three - The miniatures was glued to the top of the plastic pillar with superglue and any gaps filled with DAS modelling clay.

The base is an off-cut of 3mm thick plastic card cut into a rough circle with the edges first cut and then sanded to a chamfer.

The simple groundwork is more DAS modelling clay added over a layer of uPVA glue. 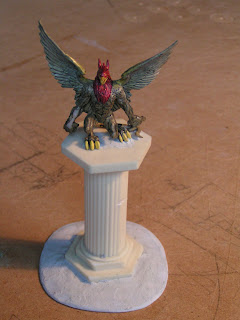 Image Four - The groundwork has been further textured with sieved stones and fine sand applied over dilute uPVA glue. 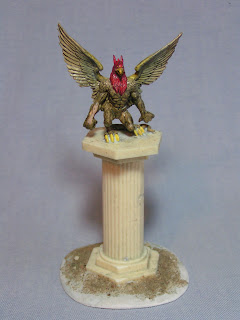 Image Five - The Flintloque Rifleorc gives some idea of the size of this statue. The model is 140mm tall (base of pillar to top of wings) and the base is 70mm x 70mm.

I could have cut the plastic pillar down, but thought that for this 'simple, quick and dirty' tutorial it was much simpler to go ahead with the pillar without any modification.

In this image the model has been primed with uPVA glue to which I have added some very fine sawdust. 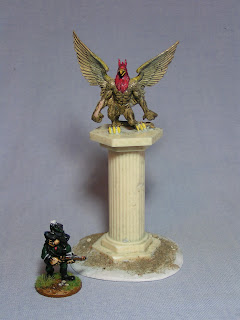 Image Six - The painting started with an all-over undercoat of dark brown, mixed with black and further refined with some lighter brown. The paint was applied with a large and soft brush, with the different colours being mixed and blended on the model 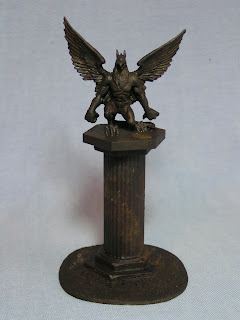 Image Seven - The stone colour has been built-up with black, white and blue acrylic paint. Little of the brown is evident! 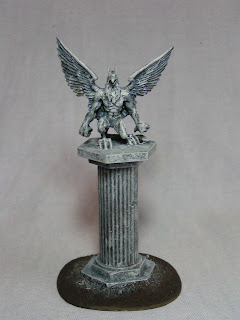 Image Eight - I have now 'washed' the model with various washes, some bought and others home-made. This helps to define detail and 'blend' the various colours together. I believe that working over a brown base and using blue in the mix fits in better with the superb images in the Frostgrave book. 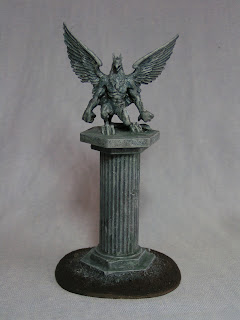 Image Nine - The base or groundwork has been painted in my usual style and colour mix - Snakebite Leather with Snakebite and Skull White highlighting. I have picked out various odd stones in grey (mixed from black and white, highlighted with more white). 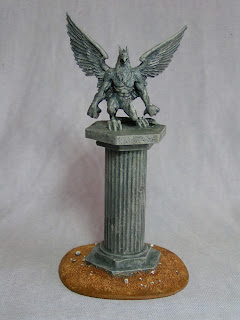 Image Ten - Prior to varnishing with Galleria mat varnish, I gave the whole model one last 'drybrush' with a toned-down white acrylic paint, just a fine dusting to highlight the sculpted detail. 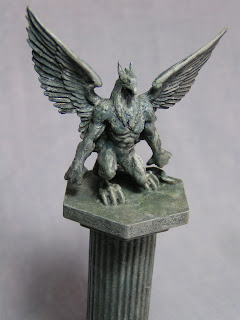 Image Eleven - The finished model to add to my (huge) collection of scratch-built terrain. The flocking is 'railway scatter' or dyed sawdust with odd clumps of ground foam and a couple of static grass tufts glued in place with superglue. 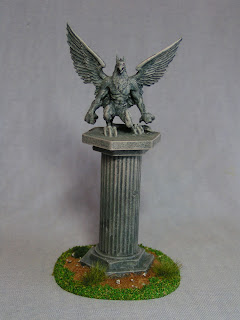 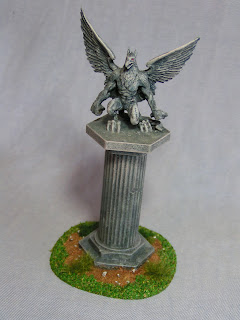 Image Thirteen - Another image with the Flintloque Rifleorc, hopefully giving an idea of the size and scale of this simple piece of terrain. 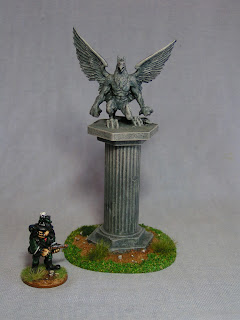 The construction took a couple of hours, then after leaving it overnight, the painting was completed today. In total the model took about 3 hours (start-to-finish) to produce and because I was using existing materials, cost nothing - a Win, Win.

I have purposely not added any snow to the model, believing that I can always sprinkle some onto the gaming table later. By not making it permanent, I can also use this model with my Flintloque miniatures and terrain.

Look out for more simple Frostgrave terrain over the next couple of months.

By publishing this tutorial I am hoping that I can raise some money for charity. If you have read and enjoyed this short tutorial, I would ask that the next time you pass a charity collection tin or someone in the street collecting that you donate whatever you think fit and remember this article.
Posted by Tony at 10:40

Nice job! I will be doing something similar...