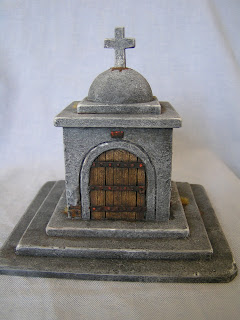 This particular model was inspired by a collection of graveyard buildings modelled by Hombre over on The Lead Adventure Forum.  In addition I had wanted to model some Witchlands themed terrain for some time.

It first appeared on the now closed Barking Irons site in September 2011.

I already have a large collection of grave stones which were made some time ago, but thought that my graveyard could do with having an imposing centre piece. 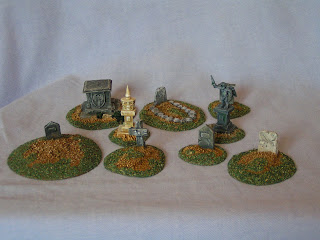 I set about sketching some ideas and settled on a box shaped tomb with a domed roof on top of some stone steps. 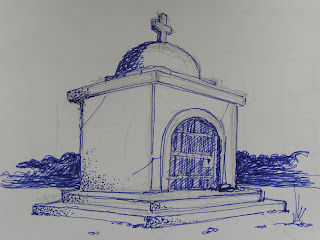 The basic construction is a block of Blue Foam, actually a couple of blocks glued together with a hot glue gun and then sanded square.  The main structure is simple however I added a front panel that has a doorway aperture which was also glued with the hot glue gun.

Note;  When working with Blue Foam, I have found that a hot glue gun speeds up construction time.  However there is no reason why you cannot use uPVA and reinforce the joints with either steel pins or cocktail sticks.

The doorway is made from textured lollipop sticks, cut into strips, distressed with a scalpel and some coarse sandpaper then glued to a piece of thin card backing.  Once the glue has set, the door can be shaped, sanded and glued into the opening. 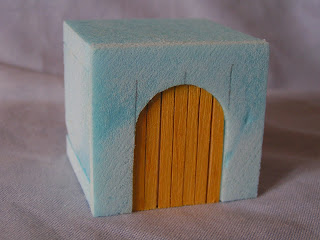 The next step was to add some architectural features.  I choose a simple archway over the door, which was first cut with a scalpel and later ‘opened out’ with a sharp pencil.  In addition I added some stone blocks to the bottom left of the doorway to show some disrepair using the same technique.

I have used some 5mm thick plastic card (actually a For Sale sign that I have had for some time) to build the roof and step.

Note;  Old or disused plastic For Sale signs offer cheap modelling material, ideal for scratch-building. Always be on the look-out for suitable plastic card which is usually thrown away. 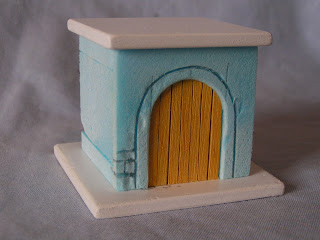 I then added two more plastic card steps to the base and one more to the top of the roof.  The domed shaped plastic ball is actually the plastic ball from a roll-on deodorant bottle cut in half and sanded flat before being superglued to the top of roof.

Note; Never throw anything away! 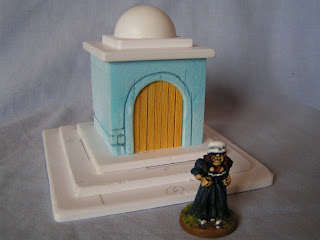 The main walls of the tomb were a little bare and needed texturing and filling-in in places.  I used a mix of ready mixed filler, uPVA glue and some white acrylic paint to ‘plaster’ the building. 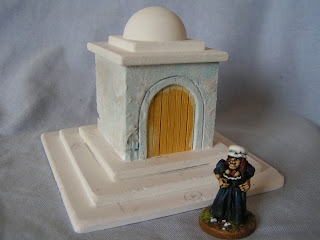 Next comes my favourite part – the detailing.  I added a large cross to the roof, which was carved from a piece of 5mm thick plastic card with the edges sanded smooth.  I mounted the cross with a metal pin in its base and superglue it in place as I can envisage this particular joint being a little fragile.

The door is details with a small lock, some metal strapping and loads of sliced plastic rod.  There is also a small plastic card plaque above the door. 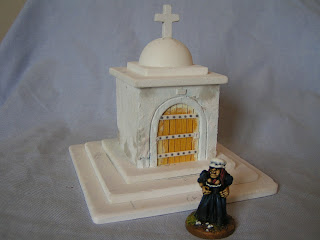 Note; Slice the plastic rod into thin slivers and apply superglue to the door strapping.  Pick up each individual sliver (or rivet) with the point of a No11 Scalpel and apply one-by-one.  It is sometimes necessary to ‘wash’ the area with some liquid cement to seal these small pieces in place. 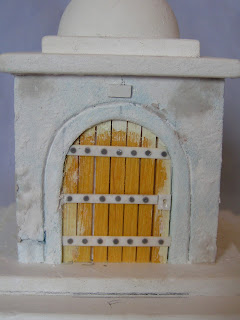 I am often asked, “How long did it take you to model that?”

The Tomb was constructed in one evening, greatly speeded up by the use of the hot glue gun and not having to wait for the glue to dry.

Now on to the painting.  I wanted to use a new technique and basecoated the whole model with a mix of Raw Umber and a small amount of Chaos Black acrylic paint.  This gives a very dark brown base. 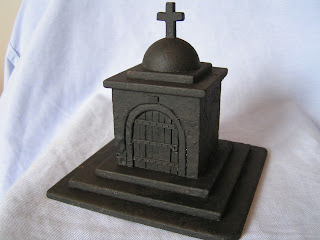 Once dry I mixed up a very dark grey.  I used Raw Umber, Chaos Black and some Titanium White.  The first highlight is a very slight colour change but by using Raw Umber instead of a more traditional Black/White base for the grey it has given the model a more ‘rich’ colour. 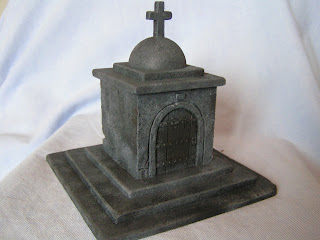 With the second highlight I used some Light Flesh and more White with the Raw Umber.  Once again the use of a non Black/White grey has given a better colour. 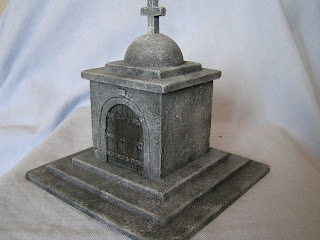 Note; When painting grey, it is sometimes the case that a plain Black and White mix can be a little too 'stark'.  By adding Raw Umber and Light Flesh, this has not been the case on this project. 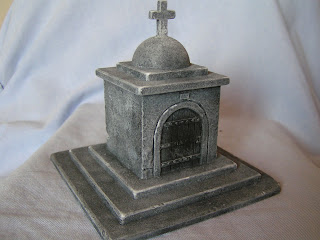 The door strapping and plaque was painted in Bestial Brown and Snakebite, highlighted with Snakebite and then pure . 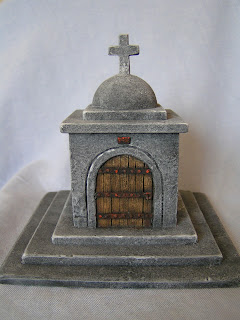 The final detailing was a wash of Devan Mud which I watered down and ran along the major joints and shadows.

I also added some Grass Tufts, which were cut in half and glued with uPVA glue with the straight edge against the join. 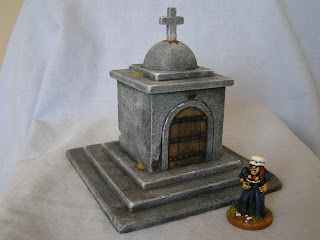 The final photo shows the Tomb finished and a Flintloque miniature alongside.  I am very pleased with the colour of the finished model.  I think that using the Raw Umber to give an alternative grey stonework colour has worked well.

It is obvious from the photos – that I have not added a base to this particular piece of terrain as is my usual custom.  I felt that with a ‘footprint’ of 120mm x 120mm the stone steps were more than enough and a larger grass textured base might have been over-powering as well as limiting its use.

The painting took about three/four hours or one evenings work.  With the simple construction – this model is a project easily within the skill base of any modeller.

As stated earlier, this particular piece of scratch built terrain was first included on the closed Barking Irons Online site. In reproducing it here I am hoping that I can raise some money for charity. If you have read and enjoyed this short tutorial, I would ask that the next time you pass a charity collection tin or someone in the street collecting that you donate whatever you think fit and remember this article.