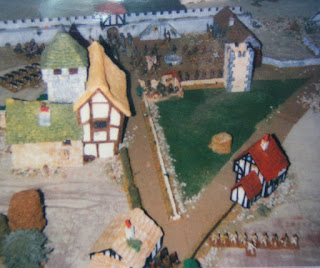 Many of my older wargame and model making projects were recorded on 35mm film (and in some cases 35mm slides). In the main these photos are stored in flip top photo albums along with family snaps. These images were found when Sue was searching for some photos of our wedding and early baby images of Gary.

The first shows one of my Warhammer Fantasy Battles layouts. The photo is dated - 15/06/86.

The Green Dragon Inn can be seen to the left with a scratch-built town wall along the top, the three buildings are also scratch-built and copies of the early Citadel card buildings, unfortunately, all three were sold on many years ago.

Most of the additional terrain is also scratch-built.

The next two images show work-in-progress on a scratch-built Orc Gobsmasha. The model was built from scrap, while visiting my Mother-in-Law and when finished spent many years as a display model in the model shop - Swansea Models and Hobbies, now long gone..... 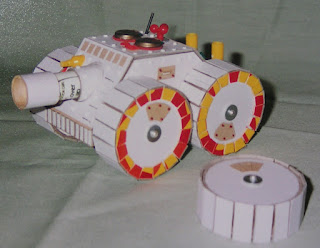 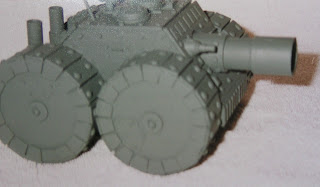 The last two photos are of another scratch-built model, this time a Narrow Gauge Crane. The model is built to a scale of 1/43rd and to run on 16.5mm or HO/OO track. This model has featured in the 16.5mm themed Narrow Gauge Railway magazine Narrow Lines. I'm not sure if I still have this model. If I do, then it is stored in the attic. 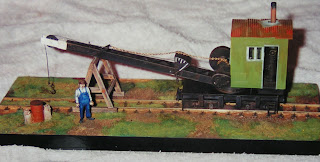 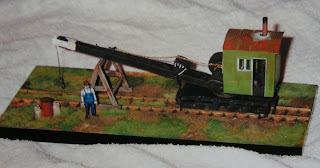 Although older models, I thought it was worth posting here, to show some of my earlier work.